“It could have been catastrophic,” said Lebec’s Steve Cozzetto, who arrived at Camp Sheideck in Lockwood Valley to see two cabins that burned to their foundations Friday, Jan. 24. U.S. Forest Service and Ventura County firefighters were still there.

Gale-force winds from the southwest had just left the Mountain Communities when the fires started at 1:30 p.m. Friday.  “If those winds had still been blowing, the fire could have spread quickly across the mountains,” Cozzetto said.

The next day the rumbling of supertankers thundered over the Gorman hills. Firefighters, helicopters and planes battled wildfire Saturday, Jan. 25. Jeff Zimmerman of Neenach was there to document the struggle. The blaze erupted shortly after 3 p.m., near Hayride Road.

It consumed five acres of tinder-dry grass where yellow and purple wildflowers once dazzled visitors from around the world. That won’t be occurring in 2014, the third year of record-breaking drought.

On Sunday, Jan. 26 hikers Katherine King and Gary Meyer were shocked to see the spreading clusters of brown trees  suddenly dotting the pine forests that blanket the mountains surrounding the Pine Mountain community.

Trees weakened from drought stress are unable to defend themselves from beetle swarms. The trees can die in clusters, creating greater fire hazard. There are also major piles of broken piñon pines and dead tree limbs from an April 2011 snowstorm that have not been removed from the forest.

At the January Pine Mountain Club board meeting, General Manager Rory Worster reported, “Fuel moisture level was 57% of normal on the Kern County side of the forest…[a level] usually not seen until the end of September.”

PMC Board Chair William Gurtner put it directly, with advice that every resident of every part of the Mountain Communities should heed: “This is the most dangerous time we’ve had for many years. There is no sign of change. We should all do everything we can to abate fire hazards around our homes. If you have firewood and dry brush near the house, get it moved. If we have a fire, it will not be [suppressed] for a long time.”

A few minutes of scattered rain sprinkles were celebrated Sunday, Jan. 26 in Sheideck, Lockwood Valley, Pine Mountain, Frazier Park and Lebec. But National Weather Service personnel said the precipitation in most places would not register as more than a few hundredths of an inch. That will make no impact on the fuel  moisture content, which means —when the moisture descends to about a 60% level—that living vegetation can burn as if it were dry kindling.

‘Wetting rains,’ by National Weather Service standards, are a quarter of an inch in a 24-hour period, he explained.

“We need to see that level of rain for a few  days running to get our fuel moisture levels back up,” Akins said. “California has a history of the ‘March Miracle’ storm that helps bring up our moisture levels.” Currently, streams and springs that normally would be recharging with snow and rain this winter season are nearly dry.

Akins estimates that 94% of wildfires are caused by humans. The Camp Sheideck fire is suspected to be the result of a faulty water heater. Dry surrounding trees helped spread the fire to an adjacent cabin. Numerous fires along Interstate 5 that rushed up into the canyons of Lebec in the past two years have been caused by faulty catalytic converters shooting hot metal onto dry roadside grass or overheated truck brakes throwing out sparks into roadside tinder.

The fire last weekend at the top of Tejon Peak near the repeater tower above Gorman is suspected to have been caused when a bird got tangled in the power lines, Akins said, causing sparks to hit dry brush.

“That fire was controlled in about one hour with resources from Kern County Fire Station 56 and three engine companies, a hand crew from Camp 12, two helicopters and the two fixed wing air tankers that are on contract to Los Angeles County Fire Department,” he observed.

It is that kind of quick and aggressive inter-jurisdictional response that has kept this region safe during the past two years of drought. But this historic dryness has increased the stakes.

“That may be one of the last fires to which the Super Scoopers respond for awhile,” reported photographer Jeff Zimmerman, a retired firefighter now living in Neenach.

Zimmerman is concerned that “the Super Scooper tanker contract with Los Angeles County is expiring and the planes will return back to Quebec, Canada for the 2014 fire season.”

Contracts for firefighting equipment such as Super Scoopers are based on normal weather cycles—not years when January has temperatures more typical of May or June.

During the past two years of drought the rapid deployment of fire-suppressing aircraft for minor blazes before they grow beyond a few acres has kept wildfires from exploding like the massive Day Fire in 2006.

That catastrophic blaze burned for almost a month. It began near Pyramid Lake, then thundered toward Ojai and then back through Lockwood Valley, threatening all the Mountain Communities and causing 85% of the mountain’s population to evacuate for nearly a week.

Akins said that the Super Scooper contract is expiring but has extensions available. He said it was extended because of the drought and is up for review again on February 15.

“The tankers have to go back to Quebec and they will need them for their fire season at some point. If they have to leave we have a number of assets to draw from,” he said.

Akins added there is a likelihood that Quebec’s planes will stay in this area until the end of February.

His larger message is that a diverse arsenal of tools is available, including DC10s, helitankers and large four-wheel-drive brush engines that can get into our rugged terrain here.

To see full stories with photos, please go to The Mountain Enterprise e-Edition

Also, this story and others are available right now at newsstands throughout the Mountain Communities.

This is part of the January 31, 2014 online edition of The Mountain Enterprise. 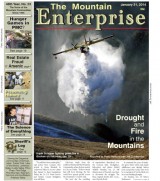 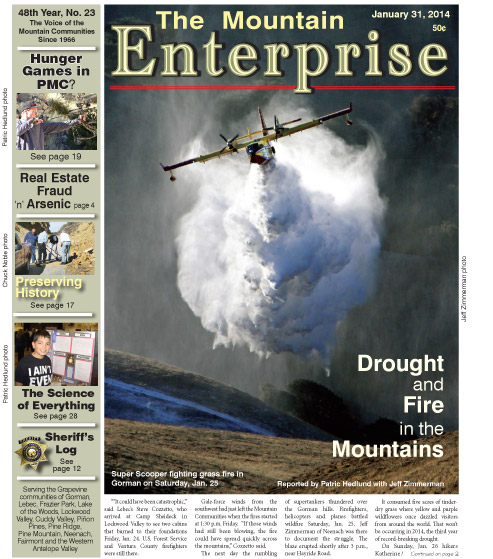