In case anyone missed the message of these past two weeks of endless vote counting, controversy and suspense, America’s legal structures are rich with checks and balances between the governed and those doing the governing. Much of that is to keep things from becoming too unfair between those who have more money and power in government and those who don’t.

What Is a POA?

The Pine Mountain Club POA was a way to excuse Kern County in the 1970s from the burden of building roads and providing services before there was a tax base to support them.

Tenneco, the developer of PMC, created PMCPOA to push the cost of maintaining basic necessary services upon the people who thought they were just buying a house.

Kern County lucked out, because they could still collect property taxes without paying to maintain residential roads in the mountains. The homeowners pay those costs themselves—over $300,000 a year currently. Everyone uses these roads. They are a priority everyone agrees upon. Few complain about the cost.

The Davis-Stirling Act is an evolving body of California law that defines, among other things, how POA and HOA boards may assess members to maintain “amenities,” like roads.

Assessments are a form of taxation—although the PMCPOA board hates us to use the “T” word in regard to their power to levy tax…oops…assessments on their members.

Maybe they are sensitive about the old Boston Tea Party battle cry, “No Taxation Without Representation!”

It might be truly scary if the POA could use their power to levy assessments on you as collateral for a loan you did not agree to, build an amenity you didn’t ask for, raise your “POA taxes” to pay for the loan, then put a lien on your property if you can’t afford to pay the increased assessments.

To take that a step further, California is a state that also gives POAs the power of “nonjudicial foreclosure.”

Across the United States, that power is playing out to be about as bad for homeowners as it sounds.

Last time we checked, PMCPOA owned north of 70 properties that have been forfeited by owners who couldn’t pay the increasing assessments, or were foreclosed by the POA. Current chairman Bill Lewis II is emphatic that “those aren’t homes, they are all bare land.”

But he does not dispute that the power is there to foreclose on homes, and that power is being used across the country.

Nonjudicial foreclosure allows the POA to sell your property to pay off liens due to unpaid assessments, fines and penalties. Keep that in mind when the prospect of taking a debt-free POA into millions of dollars of debt is on the table.

But before we go deeper into what the Davis-Stirling Act says about that, let’s look at one more dynamic in this story.

If 70 lots are forfeited or foreclosed in PMC, that affects everybody who lives there.

Current assessments, with no loan payments, are $1,604 a year for every PMCPOA member property.

If the POA’s fixed expenses are not trimmed with belt-tightening to reflect that loss in revenue, everyone else in PMCPOA has to step up to pay more, to compensate, because the expenses are shared by fewer people. So what if the loss of members was much larger than 70? What if half or more of the community was lost to fire?

So, now let’s look at why it matters when your board begins speaking about making applications to lenders, as they did in the agenda for the November 21 board meeting.

Adrian Adams was the attorney for PMCPOA before 2006. After that he made a partnership with one of the authors of the original Davis-Stirling Act, and established the Davis|Stirling website about HOA and POA law in California.

Here is the how Adams describes the unique way that a POA is asked to provide collateral for loans:

“Because real property that normally serves as collateral for bank loans is owned in common in POAs [by all the members], banks require a different form of collateral.

“Banks require that associations pledge their accounts receivable and/or a special assessment.

“Most often, it’s a special assessment approved by the membership that serves as collateral.

Our imaginations can go wild with scenario cascades, wondering what it might look like when the lender “can step into the shoes of the association” and pursue members.

That is why there is grave concern about PMCPOA’s June 2020 election and the bylaws that were passed under cover of covid, when public dialogue and debate was virtually impossible.

That election removed core checks and balances put in place in 2017 to assure due process to member homeowners.

All but one of the board’s 19 bylaw changes passed. It was a rubber stamp election to remove protections for members. Here are two troubling examples:

•Bylaw 10.08 passed. It eliminates the need for the board to consult with members before spending over $1 million on new, non-emergency infrastructure projects.

•Bylaw 10.10 passed. It eliminates the need for the board to gain approval from two-thirds of the members before directors can take the debt-free association into debt with loans of more than 25% of the annual assessments—over $1.4 million.

The board is no longer required to consult with members before such a loan.

Rollback of the bylaws that offered “fiscal control checks and balances” now enables the PMCPOA Board of Directors to enter into building projects and debt contracts of over a million dollars without seeking the consent or approval of PMCPOA homeowners.

This is part of the November 20, 2020 online edition of The Mountain Enterprise. 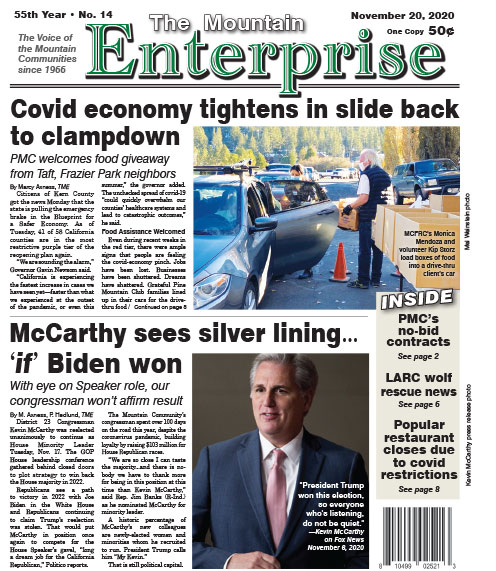