The Mountain Enterprise was founded in 1966 by Nedra Hawley Cooper, who produced the first editions on a blue Royal typewriter which is now at the Ridge Route Communities Museum & Historical Society in Frazier Park.

After numerous owners over four decades, the paper’s ownership was consolidated in November of 2006 among the three working managers, Patric Hedlund, Gary Meyer and Pam Sturdevant.

On July 14, 2007, this tiny mountain weekly newspaper won three awards for excellence in journalism at the 119th annual conference of the California Newspaper Publishers Association, including the 2006 First Place award for Best Website, First Place for Environmental Reporting and Second Place for Public Service Reporting. Read the full story about the awards.

On July 10, 2009, The Mountain Enterprise won four awards from the National Newspaper Association for its 2008 investigative reporting on the abuse of over a hundred horses at the Bor ranch in Lockwood Valley, its community service reporting on the battle to win firefighter-paramedic services in Pine Mountain, its editorial writing on the newspaper’s public service responsibility with “The Stinkin’ Public and Our School District’s Brain Drain” and for its environmental reporting with “Secret Negotiations between Tejon Ranch and Big Green Groups Sprouts Deal.”

In April of 2010, The Mountain Enterprise won the California Newspaper Publishers Association (CNPA) First Place award for Best Website and First Place in Public Service for its 2009 ongoing series about a tiny town’s struggle to gain firefighter paramedic service, in which a private ambulance company launched a disinformation campaign to convince voters that firefighters shouldn’t be allowed to  administer Advanced Life Support paramedic care. CNPA’s Blue Ribbon judging panel had this to say about The Mountain Enterprise series: “Kern County today has a better emergency response team thanks to The Mountain Enterprise. The newspaper’s gritty and persistent effort to get a firefighter-paramedic program approved on a public vote represents a notable example of journalistic public service.”

In April of 2011, The Mountain Enterprise won the California Newspaper Publishers Association (CNPA) First Place award for 2010 Best Website in its category and First Place for Best Online Reporting in all categories of weekly newspapers, of all distribution sizes in the state.

For reasons unknown to Patric Hedlund, editor of The Mountain Enterprise, and to the Badlands editorial staff, we received a press release on the Enterprise’s recent success garnering three awards for excellence in journalism from the California Newspaper Publishers Association. What is more remarkable, for a CNPA award, the Enterprise in an independent newspaper serving unincorporated towns near and along the Grapevine and in the Los Padres National Forest.

The story gets better. We contacted Hedlund because we were interested in the the paper’s reporter staff of “volunteer community reporters.” Hedlund informed us that much of the Enterprise copy is written by volunteers from the various communities the 4,000-subscription weekly covers. In fact, one of the paper’s chief missions is training good volunteer community reporters to get both sides of the story in the sprawling rural area it covers. The stories are edited by professional journalists on the Enterprise staff.

As a recent example, she told the story of being contacted by a Pine Mountain resident, LaVonne L. Lewis, Ph.D., R.N., a psychologist and an emergency room and critical care nurse. Lewis’ husband had discovered a dead bird on her porch, Lewis contacted Kern County about how to deal with the carcass and later contacted the state about how to deal with Kern County. Finally, she wrote the story that appears below. This report, it turned out, was part of a much larger breaking story that Kern County is the leading county in the state for human cases of West Nile Virus, which prompted state Sen. Dean Florez, D-Shafter, to request that the governor declare a state emergency in Kern County.

The cause of the independent weekly, fact-based journalism and the promotion of civic dialogue around public process is well served by the Mountain Enterprise.

FRAZIER PARK, CA – The Mountain Enterprise, which serves a cluster of mountain villages in the Los Padres National Forest (a tri-county area of Kern, Los Angeles and Ventura counties) has won three awards for excellence in journalism. A team of volunteer community reporters and the woman who founded the newspaper 41 years ago were all invited to accompany the paper’s owners to the awards ceremony at the historic Fairmont Hotel in San Francisco on Saturday, July 14.

During the 119th Annual Convention of the California Newspaper Publishers Association, The Mountain Enterprise received:

Management and ownership of The Mountain Enterprise was assumed by Publisher Gary Meyer and Editor Patric Hedlund in August of 2004. The two are producers of award-winning documentary films and investigative articles, including an Academy Award for Best Documentary.

More than 4,000 entries were received by the statewide newspaper association from over 400 contest participants throughout the state. Newspapers compete with their peers in categories set by size and frequency of circulation.

Context in which The Mountain Enterprise works:

A deluge of industrial and residential developments are poised to explode into the Interstate 5 region known as the Grapevine. The Mountain Enterprise’s coverage area has become ground zero for a convergence of deep-pocket interests ready to do battle with environmental litigators, starting this winter of 2007-08.

The area in which these developers wish to build is targeted by environmentalists as a critical habitat to many rare species of plants and wildlife, some of which are found nowhere else in the world. Environmental and conservation groups have lined up on both sides of the issues, some casting their lots with TRC’s plans, others against.

The Mountain Enterprise has covered the issues as they arise for public consideration, aiming always at the needs of residents and businesses to stay informed about the coming changes, while also examining possible strategies for developing a stronger local economy.

The paper closely reported detailed findings in a series of hearings hosted by the Mountain Communities Town Council and added original reporting about the Frazier Park Estates development proposal.

When community reporter Doug Peters analyzed the housing project’s six volume Draft Environmental Impact Report (DEIR) for data regarding water studies, Editor Patric Hedlund and Publisher Gary Meyer worked with him to explain clearly how ground water measurement data had been scattered throughout the report in a confusing manner.

When Peters assembled the data and presented it in a graph published in the paper, readers learned that the water levels in the proposed development area (near Frazier Mountain High School in Lebec) had fallen significantly over a period of 11 years.

Following a Kern County public presentation of the DEIR, the The Mountain Enterprise published the Planning Department’s subtle verbal assertion that, according to the development plan, Frazier Park’s Fire Station 57 would be closed and moved three miles away to the housing development site. After significant and well-informed public input by letter and email during the 45-day comment period, Kern County’s Planning Department withdrew the DEIR and required the developer to perform a complete rewrite.

It is a feature-filled yet simple-to-use site, designed for high functionality and user convenience. Back issues of the paper can be searched using a full range of Google-like search tools. It also contains significant additional material in the Community FYI areas. This year, The Mountain Enterprise’s full 42 years of history are being prepared for inclusion in the archive.

After Pine Mountain resident Harold Bailey died of a heart attack in 2005 while waiting more than an hour for an ambulance to arrive, The Mountain Enterprise reported the groundswell of community action that persisted to demand improvements by private company Hall Ambulance Service and in standards set by Kern County’s Emergency Medical Services Department.

On May 29, 2007 the Kern County Grand Jury recommended that County Fire Department establish paramedic services in Pine Mountain and that “Kern County Fire Department and private ambulance companies resolve their differences” regarding public safety in medical emergencies. Kern County Fire Chief Dennis Thompson has announced that a third firefighter will be on duty at Station 58 in Pine Mountain during all shifts by August 1 and that his goal is to have firefighters licensed as ALS paramedics on the mountain within the next two years.

A fourth series by The Mountain Enterprise received the CNPA Certificate of Achievement. The Mountain Enterprise provided in-depth reports about actions of the El Tejon Unified School District (ETUSD) board of trustees, then-superintendent John Wight and Frazier Mountain High School’s principal to offer a Philosophy of Intelligent Design course in early 2006.

While ETUSD’s superintendent provided soundbites to national TV news networks from the campus, The Mountain Enterprise published interviews with the teacher offering the course and the lead plaintiff in a lawsuit filed with eleven other parents requesting that the course be stopped. During the final days of the class, ETUSD Superintendent John Wight called the Kern County Sheriff’s Department to have publisher Gary Meyer and editor Patric Hedlund of The Mountain Enterprise arrested while reporting on the high school campus—a right and responsibility of the press on behalf of the public, protected by state and federal law.

The paper dedicated a forum for the community’s ongoing dialog about Intelligent Design in its pages for more than a month.

The lawsuit was settled and the superintendent resigned five months later, thirty minutes after being shown a videotape of himself taking gasoline, allegedly for personal use, in six trips within four hours from school district gas pumps, and appearing to pump the fuel into a system of gasoline containers assembled in the rear seat area of his car. When the board president refused to discuss the existence of the videotape and the reason for the superintendent’s sudden departure, a public records request submitted by The Mountain Enterprise secured release of copies of the videotape. The newspaper also published a carefully documented history of serious problems in a previous district where the former superintendent had served. See “El Tejon Unified School District” under “Community FYI” at www.MountainEnterprise.com for those stories. 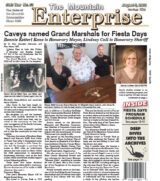 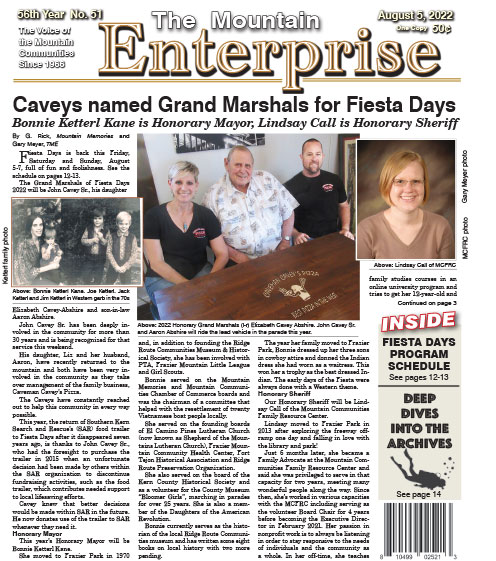