I have been a resident of Pine Mountain Club for 27 years. Back in the earlier years, street clearance was not an issue.We are in the mountains. It snows. The plow crews cleared the roads.

In just a few minutes, the plows pushed all the snow into large berms in front of our properties and homes, leaving driveways clear. Done.

Now, however, we have an entirely different procedure.

My home is located on an upper street, which is also a cul-de-sac, so we get lots of snow up here, with very little sun. And that snow sticks around a while, so we are plagued with snow bunnies, daily carloads of snow bunnies.

But the truly urgent problem now is the current lack of snow clearance.

What we are seeing now is that a plow or loader makes a strip up the middle of the street— leaving the peripheral berms of 12 to 15 feet wide and two to five feet deep around the entire cul-de-sac, piling all the moved snow in front of our driveways.

As of this moment, it appears I will not get out of my driveway until August.

The berms are clearly evident on each side of the driveway. This is two huge piles (plow shovel loads) of ice.

It is a wall of compacted ice that was not pushed against the front of the property to avoid blocking the driveway or the road.

No, this blockade was simply piled in front of my driveway and left there.

If this kind of road clearing service is a matter of not having enough crew, we need to expand that crew.

If this is a matter of the crew that exists having no idea what they are doing, and perhaps actually thinking that a strip up the middle of the road constitutes “clearing snow,” then what is really clear is that we need to train the crew.

If this is a matter of other priorities swallowing the funds that have historically been put into snow clearance, we need to reevaluate our priorities.

There is clearly a problem here that needs to be addressed.

Both my neighbors and I have missed work.

If I had a heart attack while shoveling snow for the past two days, I would still be laying out there—dead. There is no way an ambulance or paramedics could have even approached my property, let alone gotten into the driveway or house.

There is nothing that can justify that. Cul-de-sacs are last on the list for clearance. So be it.

However, once someone is sent up here with a loader or a plow truck, they need to actually clear the roads.

Getting It Exactly Backward

That means that they pile the snow into berms against properties, not in front of driveways, and the roads need to be cindered.

If our crews are unable to do that, we are wasting precious dollars having a bunch of folk driving around in clearance equipment.

Those of us who reside on this street are not the only locals who are experiencing this problem.

Can you imagine arriving at your vehicle at 5 a.m. to commute to work and realizing you cannot get out of your driveway because the snow plow drivers we pay to clear our roads left the snow they cleared from the road right in front of the driveway? Been there, done that.

Yesterday, an email was sent to residents saying, in effect, that the plow crews are working (to paraphrase) as fast as they can, large berms are evident everywhere, and here is a short list of local phone numbers for folks we can pay to clear those berms.

I am fully prepared to take this problem under my wing. This is not rocket science.

I have friends and relatives all over the country, in states where the storm we just had was a dusting. They rarely miss work. They are never blocked into their own driveways by berms created by clearance teams.

If the roads are cleared, they are thoroughly cleared and cindered.

But to solve a problem like this is going to take a team effort.

All of you up Woodland, Tirol, Glacier, Linden, Freeman, Ironwood, Zermatt, Pioneer and Lassen: Speak up!
If we put our heads together and present a solution to our PMCPOA Board of Directors, we can solve this problem.

I realize that if the word “volunteer” comes up, the word “liability” will quite literally follow it.
Get that.

But we either pay for that liability or we pay to enlarge and train our crew.

Our safety is on the line here.

Editor’s Note: The PMCPOA management has been invited to respond.

We are a community newspaper. Differing opinions and the underlying facts for each are welcomed.• Civility counts. Name-calling doesn’t. • Letters are 250 words or less; OpEds are 350-500 words. Deadline is 5 p.m. Saturday for the following week’s paper. Include your full name, village of residence and phone number (for editor’s use) to Editor@MountainEnterprise.com.

This is part of the January 3, 2020 online edition of The Mountain Enterprise. 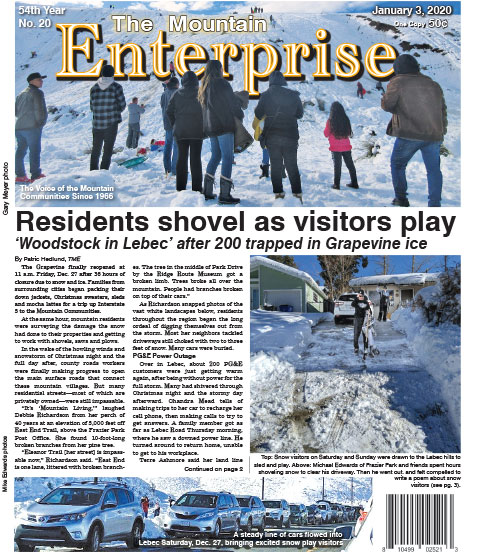