Washington, D.C. (Friday, Nov. 13, 2020 at 6 a.m.)—A statement has been issued by the United States Department of Homeland Security to  the American public: “The November 3rd election was the most secure in American history.”

This is an extraordinary action in extraordinary times. On Thursday, Nov. 5—while states were still immersed in methodically counting the votes of the citizens—President Trump went before cameras in the United States White House to proclaim himself the winner of the November 3 election.

At this time, November 13, former Vice President Joseph R. Biden has qualified for 290 electoral college votes. President Donald J. Trump, running to serve a second term, has qualified for 217 electoral votes. A minimum of 270 electoral college votes is required to be designated president-elect. The count reported by the states so far shows a popular vote lead of over 5,000,000 (five million) for Vice President Biden, who has over 78 million votes as of today.

President Trump has refused to concede.

There has never been a president in the history of the United States who did not uphold the peaceful transfer of power demonstrated by President George Washington, and upon which the strength of American democracy is founded.

The Electoral College is scheduled to meet December 14 to vote in accord with the will of the voters of their respective states. The inauguration of the president-elect is to occur on January 20.

More Americans voted in the 2020 presidential election than ever before in history, despite the covid-19 pandemic. Before election day, 110 million ballots were cast by mail-in vote. All legal absentee ballots mailed on or before November 3 are being counted (active military personnel stationed abroad have a slightly extended voting period).

Conspiracy theories and lawsuits are being generated by President Trump, his followers and his attorney Rudolph Giuliani.

The Department of Homeland Security’s Cybersecurity and Infrastructure Security Agency (CISA) Director Christopher Krebs has advised the public: “Do not pass along sensational but unverified rumors that take insubstantial events and magnify them into broad disinformation campaigns.”

Krebs said in interviews with national media today that he expects to be fired by the Trump Administration.

In this second week since the election, President Trump has turned to generating tweets to “terminate” national security officials and others at the top rungs of the American government—most put in place by his own administration. Observers speak of “purges,” in which he is reported to be firing those who are not willing to deny the results of the election. President Trump is reported to be hastily seeking to substitute-in Trump loyalists during this lame duck period before the January 20 inauguration of the newly elected president. [See Department of Defense Press Release from Nov. 10, below—Editor ]

In this context, the U.S. Department of Homeland Security—with staffing largely compiled by President Trump’s administration—has taken an extraordinary measure to report to the nation the results of their research and analysis of the 2020 election. This is the entire statement:

“The November 3rd election was the most secure in American history. Right now, across the country, election officials are reviewing and double checking the entire election process prior to finalizing the result.

“When states have close elections, many will recount ballots. All of the states with close results in the 2020 presidential race have paper records of each vote, allowing the ability to go back and count each ballot if necessary. This is an added benefit for security and resilience. This process allows for the identification and correction of any mistakes or errors. There is no evidence that any voting system deleted or lost votes, changed votes, or was in any way compromised. [Emphasis provided by original DHS document—Editor]

“While we know there are many unfounded claims and opportunities for misinformation about the process of our elections, we can assure you we have the utmost confidence in the security and integrity of our elections, and you should too. When you have questions, turn to elections officials as trusted voices as they administer elections.”

As of Friday, Nov. 13 at 10 a.m., the statement above can still be seen as posted originally at the DHS website.  Below is a press release from the Department of Defense documenting personnel changes this week at the highest levels of the Pentagon.

Also today, Ms. Stewart submitted her resignation from the position of Chief of Staff, effective today.  Mr. Kash Patel, currently on the National Security Council staff, has been named by Acting Secretary Miller as his Chief of Staff.

Acting Secretary of Defense Miller issued the following statement on these personnel changes:  “I want to thank Dr. Anderson, Admiral Kernan and Jen Stewart for their service to the nation and the Department.  Over their careers each has contributed greatly to the national defense and the future of the Department of Defense. We wish them the best in their next endeavors.

—This Breaking News has been compiled by
Patric Hedlund, TME Editor

This is part of the November 27, 2020 online edition of The Mountain Enterprise. 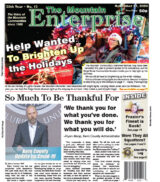 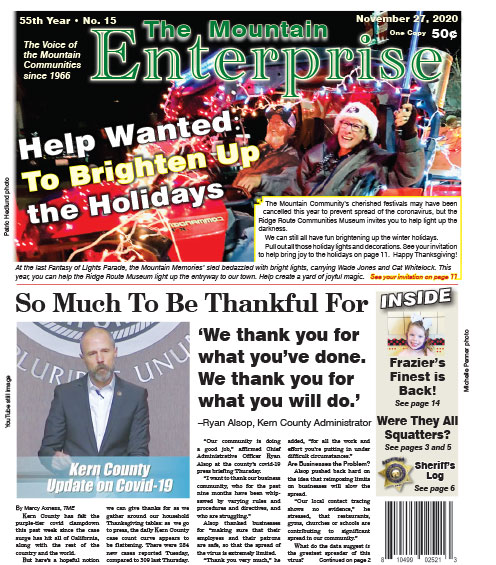