From 2010 through the summer of 2012 residents of Pine Mountain, Cuddy Valley and Piñon Pines were held hostage to the obsessive behavior of a ring of burglars alleged to also have drug habits. Cuddy Valley was literally up in arms. Break-ins at vacation homes and vacant properties in the worst days of the recession in Pine Mountain made that community a plunder field.

Suspicion began to center on a man named David Michael Cook, born in 1978 or 1976, who lived in Pine Mountain and then in Piñon Pines. Wherever he lived, it seemed a crime spree coincidentally erupted around him.

Cuddy Valley neighbors were outraged at the break-ins to their barns and tool sheds. Over 80 of them came together in Cuddy Hall on March 5, 2012 to formulate a plan to protect their homes and property. Fury was growing hot. Working with the neighbors and law enforcement, we published a story about the event: “Burglaries Mobilize Cuddy Neighbors—‘We’ve Had Enough’ Cuddy Valley Says.”

On March 14, 2012 Michael Cook was arrested for petty theft and taken into custody. By March 20 he was also charged with receiving stolen property, bringing alcohol or drugs into jail, possession of a controlled substance and driving while under the influence of alcohol. We asked for the booking photo. The Kern County Sheriff’s Office refused to release it. But the epidemic of burglaries throughout the region magically stopped.

March 26 was Cook’s big day in court that spring. He pled “no contest” to the charges above. Charges for possession of controlled substance paraphernalia, being under the influence of a controlled substance, possessing over 28.5 grams of marijuana and driving without a license were dismissed. He was sentenced to 30 days in jail with 15 days off for good behavior for the petty theft charge, given an additional sentence of one year and four months for the other counts.

Cook was given 140 days off “for good behavior” before even beginning to serve time in Wasco State Prison. That brought his sentence down to under one year. Because of the overcrowding in state facilities, and the infamous Assembly Bill 109 leading to early release of prisoners and no possibility for effective rehabilitation, Cook returned to the community within four months. Burglaries began again throughout the region.

The Mountain Enterprise published a story, “They’re Baaaack: Cuddy Valley burglaries resume” about an August 5 break-in on the property of Cuddy Valley’s Karen Schott. She again asked the sheriff to release booking photos.

On August 17, 2012 Cook was arrested again. This time he was charged with first degree felony burglary. He pled no contest. A charge of possessing a controlled substance was dismissed. He was credited with 56 days for good behavior and sentenced to two years in Wasco State Prison.

But this week, on Saturday, Jan. 4, 2014 Michael Cook walked into the office of The Mountain Enterprise.

He asked to place two classified ads in this newspaper. One is seeking work as a handyman in people’s homes; the other is for his girlfriend, seeking work cleaning homes.

When we realized who he was, we found our local sheriff’s substation had not been alerted that Cook was released early again. We contacted Cook where he is staying in Frazier Park to give him his $11.50 back. You will not see those ads in these pages. AB 109 makes the state complicit in putting citizens at risk.

This is part of the January 10, 2014 online edition of The Mountain Enterprise. 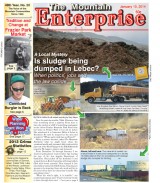 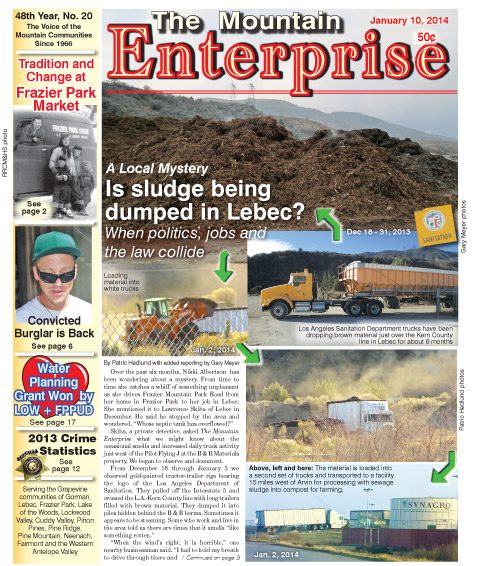