UPDATE —LEBEC, CA (Tuesday, July 23, 2019 at 4:09 p.m.)— The Tejon fire (including its northern and southern components) is now 100% contained, according to Kern County Fire Department Public Information Officer Andrew Freeborn. “All resources have left the scene,” Freeborn said. “They finished up at about 3:30 p.m. today,” [Tuesday] he said. The final acreage burned was 208 acres.

UPDATE —LEBEC, CA (Monday, July 22, 2019 at 4:55 p.m.)— The Tejon fire is now 70% contained (10% less containment than fire officials reported yesterday). 200 acres are reported to have burned. Containment estimates are now being given as one fire, merging the Tejon fire and the northern fire, which have been only a couple of miles apart.

UPDATE —LEBEC, CA (Sunday, July 21, 2019 at 8:52 p.m.)— At 3:30 p.m. Sunday afternoon dispatchers transmitted multiple calls for response to a fire on Southbound Interstate-5, just north of Fort Tejon—which ended up being two fires. Over 200 personnel responded, including helicopter support. By 8:30 p.m. Sunday evening the two fires (75 acres on the north and 150 acres on the south) were 80% contained.

First arriving crews were faced with two separate fires about a quarter mile apart, both fires were in light, flashy, fuels, headed uphill in hot/dry weather conditions. It was quickly determined that the southernmost fire was a threat to Digier Canyon and the approximately 200 homes there. Mandatory evacuations were ordered for Digier Canyon, with an evacuation center designated at the Frazier Mountain High School.

Multiple strike teams,task forces, and air resources were ordered, with an emphasis on the protection of the Digier community and the people there. At this time (8:30 p.m. Sunday night) forward fire progress has been stopped on both fires. Acreage has been held to 150, and 75 acres respectively. The evacuation order has now been lifted and residents may repopulate Digier
Canyon. Crews will remain on scene throughout the night to achieve full containment and to complete mop up.

Sign up for ReadyKern.com: The Kern County Fire Department would like to remind residents to register with ReadyKern.com. This free notification service rapidly disseminates time-sensitive messages to every telephone
number and email address stored in the notification database. To receive important communications from Kern County, residents and business owners must register the voice and text communication devices on which they wish to receive messages.

LEBEC, CA (Sunday, July 21, 2019 at 7:37 p.m.)—Forward progress of the Tejon fire near Digier Canyon has been stopped. The evacuation order for Digier Canyon will be lifted soon.

LEBEC, CA (Sunday, July 21, 2019 at 5:40 p.m.)—Two helicopters and several fixed-wing air tankers are assisting Kern County Fire Department to knock down a wildfire burning through a drainage area below Digier Canyon. The incident commander was heard saying, “It’s looking good,” referring to progress being made to contain the fire. Crew 10 (The Golden Empire Hot Shots) arrived on scene at about 5:10 p.m.

LEBEC, CA (Sunday, July 21, 2019 at 4:01 p.m.)—A fire alongside southbound Interstate 5, south of Fort Tejon, has caused evacuation of Digier Canyon in Lebec. An evacuation center is being set up at Frazier Mountain High School. This page will be updated when more information is available. 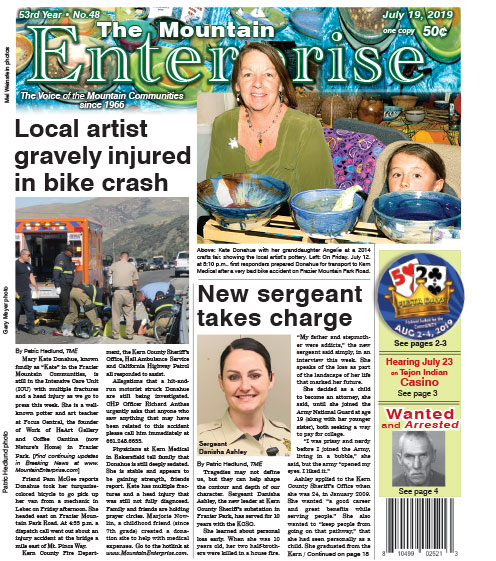