Those who love the epic scale, intrigue and crafty plot twists of historic dramas set at moments of critical change have a choice this year to order up buttered popcorn in a darkened movie theater or simply plan to attend the real-life hearings about land use decisions and water allocation happening right here at home.

On March 3, the Lebec County Water District (LCWD) staged an impressive event that is an opening act in the slow-motion saga of developers seeking permits to carve up the mountains along the Interstate 5 corridor for housing developments that could triple the population of this region. The hopeful entrepreneurs are plagued by residents who keep asking "But is there enough water?"

Callagy represents Paso Robles-based developer Frank Arciero’s Falling Star Homes. Their first bid for permits proposed over 700 homes studding the hillsides encircling Frazier Mountain High School. That effort was sidelined when Lorelei H. Oviatt, senior planner with Kern County, dropped the flag under pressure of unrelenting evidence from the community that the developers had not done their homework.

Callagy’s revised plan for Frazier Park Estates specifies over 650 homes, 40 apartments and commercial strip malls. They seek annexation by the LCWD, which currently services 300 residential and commercial customers. This development could triple the amount of water used in the region.

Board members Steve Cozzetto, Darren Hager and Dale Mann heard Mary Lou Cotton, senior water resources manager from LCWD’s Kennedy/Jenks Consultants, shred the credibility of the three-inch stack of new research submitted by Callagy for not showing adequate water supply for seasonal spikes in demand during drought years, among other alleged shortcomings regarding SB610 and SB221, "laws to improve the link between water supply and land use decisions."

In the audience were at least five Tejon Ranch Company associates. At the front desk, representing LCWD, sat lawyer Dennis Mullins, TRC shareholder and former general counsel for the company that hopes to build 3,500 luxury homes and a series of lavish resort hotels across the freeway from Callagy’s proposed mid-priced project.

Callagy, asking to sit for his presentation, said he hadn’t known LCWD needed "this level of detail" to consider annexation.

Lake of the Woods resident Doug Peters said the formerly seasonal Castac Lake, at the heart of TRC’s Tejon Mountain Village marketing campaign, consumes 3,000 acre/ft. of pumped water a year, without factoring in use by future residents or commercial endeavors. "That dwarfs the consumption calculated in [Callagy’s] research," Peters said. Cumulative impact on the water table of the entire region from the two projects must be considered, and assertions that the Cuddy water basins are disconnected is not based on evidence, he argued.

LCWD tabled Callagy’s petition until he can return to answer the consultant’s critique.

This is part of the March 07, 2008 online edition of The Mountain Enterprise. 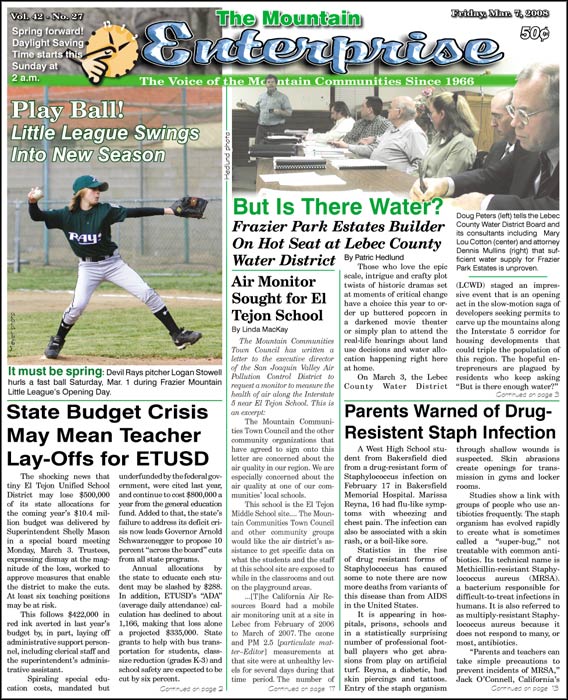