Smoke-choked air hid the sun in our Mountain Community’s Labor Day week as the massive Creek fire raged across Fresno County 200 miles to the north. It pushed billowing smoke clouds south while trapping hundreds of campers who had to be evacuated by National Guard helicopters. By Monday the U.S. Forest Service took a nearly unprecedented action. They closed eight of California’s nine national parks, effective immediately.

Over two million acres of California had burned as of Tuesday, Sept. 8, the California Department of Forestry and Fire Protection (CalFire) reported.

The 2006 Day fire illustrates why the notion of a firebreak is not a cure-all for stopping a fast-moving, wind-driven fire. This fire jumped right across Lockwood Valley Road, right past the firefighters and their equipment. Residents had evacuated. Similarly, the town of Eugene, Oregon, which Timothy Ingalsbee calls home, was badly threatened this week. His colleague, Dominick DellaSala, evacuated from Talent Oregon, where blowing ember storms incinerated homes two miles away from the fire.

For the Record: California and Oregon were burning on Wednesday night, Sept. 9, as The Mountain Enterprise went to press. Part One of our Special Report “California Burning — Debate rages amid smoke and flames: How do we stay safe?” contained an error.

Firefighter and scientist Tim Engalsbee was preparing to evacuate from his home in Eugene, OR, when we interviewed him on Tuesday. It was his colleague Dominick DellaSala whose hometown of Talent, Oregon, was devastated by the Alameda fire. See excerpts of DellaSala’s OpEd about the fires ravaging the west on page 5. Our online archive at www.MountainEnterprise.com has been updated with the correction.

The e-Edition is available now with full photos and stories at The Mountain Enterprise e-Edition. Select the 2020-0911 edition.

This is part of the September 11, 2020 online edition of The Mountain Enterprise. 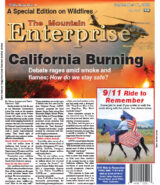 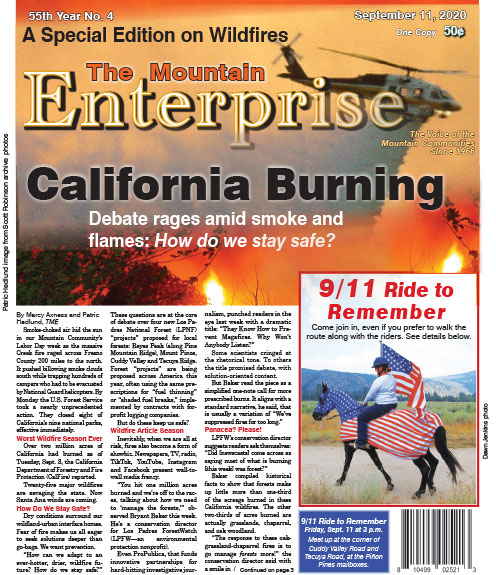