Warning: this subject matter may be disturbing to many, including children. The photos in the slideshow at right depict deceased persons.

Authorities have decided to publish these photos with the hope that family members or acquaintances can identify these people.

There is compassion in the voice of Sergeant Denise Sliva of Ventura County Sheriff’s Department as she speaks about her hope that “somewhere out there, someone will see your story and help us find the families who lost their loved ones 35 years ago. They still don’t know what happened to their mothers, their daughters.”

Two victims of rape and murder whose pictures Sliva distributed at a press conference on Wednesday, Sept. 30 have never been identified, but the identity of the man authorities say assaulted them has been discovered. He is in prison, but is up for parole in 2017.

Ventura County District Attorney Gregory D. Totten has filed a murder charge against Wilson T. Chouest. The prosecutor hopes that our readers will help find family and friends who can come forward with identities for Jane Doe 1 and Jane Doe 2 so the victims will finally have justice, with the dignity of their real names.

“The Cold Case Unit wants to return them to their families,” Sliva said. If you recognize these women, please contact coldcase.187@ventura.org. —Patric Hedlund

On July 18, 1980 at about 12:30 p.m., Sheriff’s patrol deputies responded to a call of a dead body found in a parking lot of Westlake High School, 100 N. Lakeview Canyon Road, in Westlake Village.

The murdered woman was at the foot of a dirt hillside in the rear parking lot of the school, accessible from N. Via Merida.

The unidentified woman had been sexually assaulted, stabbed and strangled to death elsewhere before being dumped in the school’s parking lot.

Her autopsy determined she was approximately five months pregnant with a son. Thirty-five years later, the murdered woman still is not identified.

As a result of major advances in DNA, in 2012 DNA that was collected from Jane Doe 2’s clothing and fingernails was submitted to the Combined DNA Index System (CODIS).

Wilson Chouest was identified as the person associated with this DNA. Chouest is serving a life sentence in state prison for the kidnap, robbery, and rape of one woman, and kidnap and robbery of another in Tulare County in August and September of 1980. Chouest is eligible for parole for these crimes in 2017.

This new DNA information gave the investigation forward momentum, especially when investigators learned Chouest had been linked through DNA to another Jane Doe homicide in Kern County. The body of Kern County’s Jane Doe 1 was found in an almond orchard near Delano on July 15, 1980, three days prior to Ventura County’s Jane Doe 2 being found. While detectives from both agencies worked to develop evidence in the case against Chouest, they continued in their efforts to identify the two Jane Does.

The women have been featured on bulletins shared on social media platforms and on numerous Jane Doe websites. Despite not being able to identify the women, the investigation developed evidence that shows Chouest is responsible for the deaths of the two women and the unborn child.

On September 23, 2015, Chouest was brought back to Ventura County on a court order. He was arrested on September 30, 2015 for murder. Chouest is due to appear in court on Thursday, Oct. 1.

These victims have been unidentified for 35 years. Each woman had a live birth prior to their death.

Somewhere, there are families whose mothers disappeared in July of 1980, never to be heard from or seen again. We want nothing more than to bring answers to the families and return their loved ones to them.

Chouest traveled throughout several counties during his four months of freedom in 1980. Investigators believe these women’s kidnappings and murders could have occurred in Tulare, Kern, Ventura or Los Angeles Counties.

At Right: Wilson T. Chouest’s booking photo in 1980, just months after the two Jane Does were murdered. Chouest was arrested Wednesday, Sept. 30 in Ventura County for suspicion of murder in the 35-year-old cases. DNA evidence linked him to the crimes. Below, right: In 1980, Chouest drove a green 1968 Plymouth, similar to this one. Email Coldcase.187@ventura.org if you knew him in 1980.

This is part of the October 2, 2015 online edition of The Mountain Enterprise. 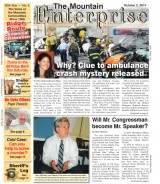 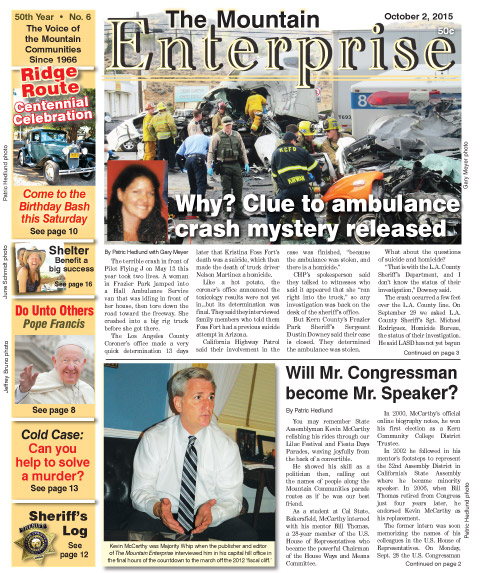