Compiled by The Mountain Enterprise from data supplied by KCSO

The two charts on this page provide an overview of vital statistics about crime investigations in the Frazier Mountain Communities from the first day of 2009 through the last day of 2013. This five-year scan from the Kern County Sheriff’s Office makes trends clear. Frazier Park substation Sergeant Mark Brown said a significant increase in heroin use appears to be in line with state and county trends. First, a summary:

Over the five years between January 1, 2009 and December 31, 2013 the Frazier Park substation investigated 295 drug crimes (including alleged use of methamphetamine, heroin, opioid medication, drug paraphernalia possession and marijuana related crimes).

A more detailed breakout of drug investigations is included in the table above. The bar graph at the bottom of the page shows how drug crimes compare to property crimes and crimes against persons.

In that same five years the substation also investigated 1,140 property crimes (such as burglary, possession of stolen property, automobile theft, larceny, fraud, forgery, identity theft, vandalism and trespass). There can sometimes be a link between property crimes and drug use in a community.

A Closer Look at Drugs

The Frazier Park substation logged an average of one drug crime investigation a week from January 1, 2009 through December 31, 2013. The 295 drug crimes mentioned above are broken out in this chart.

In the four years of 2009 to 2012, KCSO investigated 29 narcotics crimes, 17 of those involving possession of an opioid medication without a prescription, not heroin possession.

Heroin investigations increased sharply from 2012 to 2013 by more than 69%. In 2013 alone, KCSO deputies investigated 28 narcotics crimes. Most of those involved heroin possession. The increase appears to be in line with state and county trends. If the current trend continues, more heroin crimes than methamphetamine crimes will be investigated in 2014.

Opioid medication possession without a prescription was down sharply in 2011 and 2012. Compared to 2009 and 2010, the rate fell from 15 to 2 crimes, but in 2013 that figure increased sharply. It went from two crimes to nine, and many of those who illegally possessed opioid medications were minors.

Illegal marijuana possession fell sharply (approximately 91%) between 2009 and 2013, possibly due to the increased use of medicinal marijuana cards and the fact that the penalties for possessing less than one ounce of marijuana were reduced from misdemeanors to infractions in 2011.

The Kern County Sheriff’s Office is committed to work in partnership with our community to enhance the safety, security and quality of life in Kern County.

To see full stories with photos, please go to The Mountain Enterprise e-Edition

Also, this story and others are available right now at newsstands throughout the Mountain Communities.

This is part of the January 17, 2014 online edition of The Mountain Enterprise. 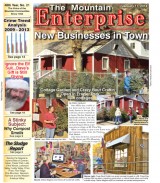 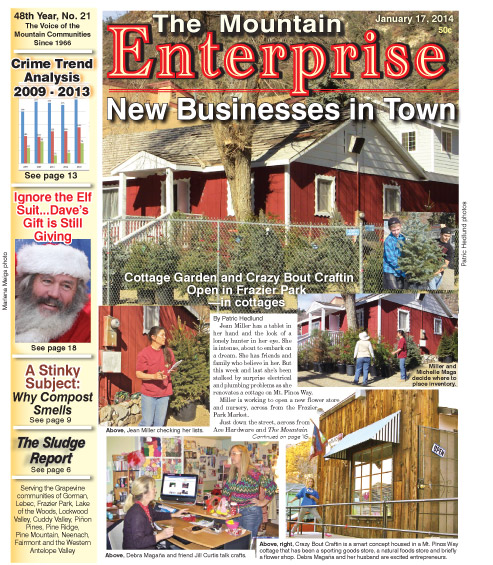