The Lake Hughes Recovery Shelter seeks to provide a supportive living homeless shelter with “nonmedical drug treatment” in Gorman. It appears to have crashed into a brick wall of misunderstandings with the Golden Valley Municipal Water District this month. Frustration is heated and evident from both parties.

At issue is the shelter’s demand that the water district provide a “will-serve” letter so it can secure an occupancy permit from Los Angeles County.

Golden Valley Municipal Water District (GVMWD) protests that Alex Frankian, the corporate officer for Lake Hughes Recovery Shelter (LHRS), did not provide the information requested in December 2020 so the needs of the facility could be determined.

Golden Valley’s Board president Ryan Ralphs said in an interview that Frankian appears not to take the request for data seriously. The board held an emergency meeting last Friday, Sept. 17, after receiving an “inadequate” reply from Frankian about the anticipated residency at the shelter. An attorney’s letter from the district was sent to Frankian on September 6 to emphasize the gravity of the issue.

Frankian did not attend the meeting. Three LHRS employees spoke on his behalf.

They showed heated impatience with the board’s request for actual numbers of people that would need to be served by the sewage and water system.

The attorney’s letter had said it was “the third and final warning,” and that the district might not be able to provide a will-serve letter to the shelter.

The district today provides water and sewage treatment services to the businesses of Gorman, but the original system was put together to serve the Ralphs family cattle ranch.

In the 1980s, the family’s water system was turned into a municipal district, subject to state regulations, as it began to serve the traveling public stopping off the Grapevine for gas and a bite to eat.

There has never been much of a resident population in the tiny town—well under 100 people, often half that. Most years, not one child from Gorman attends Gorman Elementary School.

Most the residential parcels have been owned by Ralphs family relatives. The system was created to serve not more than 600 people, the board explained, adding that of the 100,000 vehicles passing daily on the Interstate-5, Gorman may have as many as 10% stopping to use toilets at local gas stations and restaurants.

They said bringing the wastewater system up to the capability required for a full-time 24/7 capacity residency at the shelter could cost “millions of dollars.”

Lake Hughes Recovery Shelter employees left the meeting refusing to give their names and visibly angry.

The next morning a series of strange internet events took place related to LHRS, Golden Valley, The Mountain Enterprise and a very surprised local realtor.

Starting at 6:09 a.m, a note to the local realtor from “AF” (the way Alex Frankian signs many messages), and forwarded to his own company and employees, as well as the Golden Valley Municipal Water Company: Has someone criminally mismanaged the website along with the entire Water District?”

It accused the realtor of “hijacking” the GVMWD website, saying “the Community wants answers.”

That was followed at 8:44 a.m. with a letter from “Jessica Lee Cook” from IP address 172.89.101.224 to TME’s Breaking News account. It said things that reporters for the newspaper who were at the meeting know are not factual.

“The Board for the GVMWD stated in their board meeting that they do NOT possess records for the Public Water Utility named Golden Valley Municipal Water District….

“GVMWD is a mafia and should be stopped….GVMWD must be met with a Criminal Investigation of the entire Board of Directors….

“I will be contacting the FBI, EPA, CSWRCB, IWMB, District Attorney’s Office. Is The Mountain Enterprise trying to protect GVMWD directors by NOT reporting their obvious mismanagement??”

Over the rest of the day, our Breaking News account received seven more emails of this kind from six additional “concerned community members,” all with the very same IP (internet protocol) address: 172.89.101.224.

All used inflammatory language, made threats of “criminal liability” or mentioned “mafia.”

This is part of the September 24, 2021 online edition of The Mountain Enterprise. 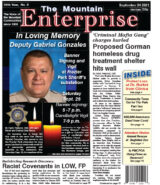 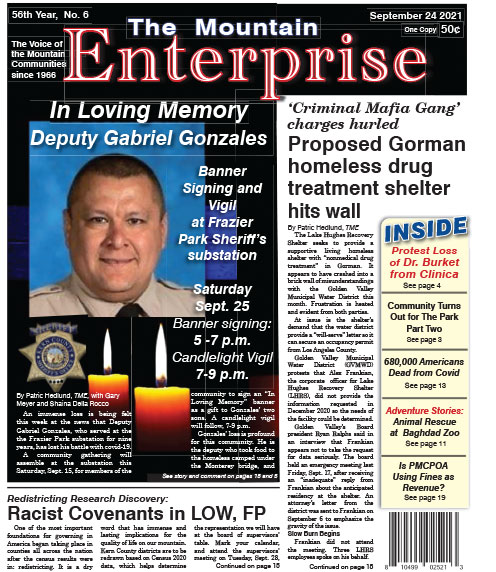