“I feel that this is like a divorce…and that you are keeping the children…,” said Trustee Anita Anderson, who has been on the ETUSD school board for six years. “We care about all these kids. This is really painful.”

In a state that dreams of someday finding a way to bring its public schools to an Annual Performance Index (API) of 800, PMLC is the highly successful parent-led public charter school which has been literally a rising star, performing at the highest levels compared to other schools in California, with a score of 901 in 2011.

By contrast, ETUSD has other schools in ‘program improvement’ status, which means that they do not meet federal improvement goals. In 2011 they nudged between 735 and 776 in API scores.

“PMLC is the crown jewel of the district,” said a longtime district staff member. “This is a sad day.”

In the beginning
About 50 onlookers attended the ETUSD board meeting March 14. The majority were there to support the community school that had its beginnings in year 2000, created by a group of parents. Their goal 13 years ago was to create a neighborhood school rich with parent involvement that was close to their homes. They didn’t want small children riding buses on the “S” curves of Mil Potrero Highway in wintertime when roads can be icy and dangerous.

The initial year was chartered with Gorman School District, but classes were held in the Pine Mountain Christian Community Church log cabin activity hall. When the church decided to take their building back, a year’s hiatus followed as parents searched for a suitable long-term location. During that time they also rewrote their charter, filed again and applied for a federal ‘start-up’ grant.

They found an old ski lodge property a few miles west of the Pine Mountain community. It is owned by Kern County, surrounded by the Los Padres National Forest.

ETUSD’s welcome to the charter was “on the condition that we would pay for all our own expenses,” recalls veteran teacher Carolyn Schwantes.

Today PMLC has about 93 students, from kindergarten through 7th grade. It is governed by a school advisory council (SAC) comprised of parents, who set policy to guide teachers and the principal. Parents must sign an agreement to volunteer a set number of hours to the school per year.

Last week SAC Treasurer Jessica Hawley told the ETUSD board that in its 10 years of operation, the school has always paid for its own equipment and expenses, as agreed.

Their initial start-up grant of $450,000 covered furnishings and supplies. State allocations for students, known as ADA, cover personnel and health insurance. Their annual cycle of fundraisers pay for everything else.

Hawley and Schwantes said PMLC also pays 4.8% of its income to ETUSD for administrative services, “whether we use them or not,” and fees for special education services for students who need that help.

Former president and now vice president Amy Masuhara recalls that former superintendents had been supportive and proud of the little charter that was doing so well: “’We did our own thing. Personnel and hiring was handled by our school. It wasn’t until Katie [ETUSD Superintendent Katherine Kleier] came on that it began to change.”

Turmoil begins in ETUSD
In the past three years, turmoil in the El Tejon Unified School District mixed with the economic recession to result in declining enrollment for ETUSD’s schools. The loss of students—and the income that comes with them—made state cutbacks in per-student payments even more painful.

Two years ago Kleier told the charter that layoff notices would be going to their staff too, because teachers and aides with union seniority would have a right to take the jobs of the less-senior educators who had become a strong part of the learning center’s successful team.

Danger signals
That intrusion into the well-trained, well-coordinated charter program that was working so well for children—and rising so high in state academic performance measures—was a danger signal to charter parents, who expressed concern that the superintendent might wish to dismantle the Pine Mountain Learning Center.

A 12-point tumble in PMLC’s API scores in 2012, from that lofty 901 down to 889, was attributed to staff changes mandated by union seniority rules enforced by the district. Their status as a ‘dependent’ charter school took on major significance.

Declaration of Independence
Meanwhile, the state charter for PMLC is coming up for renewal this June, 2013. The School Advisory Council began to consider the merits of renewing as an ‘independent’ charter school, managing its own fiscal and personnel affairs.

In fact, says Masuhara, it was Superintendent Kleier who first brought that idea to their attention. She noted that independent charter schools are not bound by the union rules that had caused pink slips to be given to some of the Pine Mountain Learning Center’s cherished staff.

Teachers’ aides were laid off by the district and more senior ones reassigned by ETUSD to the learning center. The charter’s goal to manage the learning environment with a stable staff came up in renewal talks with their attorney and ETUSD’s attorney this month.

Attorneys and complications
Bill Hornbeck of Schools Legal Services told ETUSD trustees and the public on March 14 of complications facing the charter.
He said if Pine Mountain Learning Center files for a new ‘independent’ status (rather than renewing its present charter as a ‘dependent’ school under the authority of ETUSD), “the flow of state funding could be interrupted.”

Retaining the waiver for the school’s location could also be a problem, Hornbeck said. Now that ETUSD has less students, there might be facilities space to offer the charter. ETUSD could possibly ask the school to move away from its forest location close to the Pine Mountain community. Perhaps, Hornbeck implied, the waiver would not be granted.

Another issue was whether the charter’s current assets could be seized by ETUSD if PMLC decided to become independent. Technically, as a dependent charter, funding flows through the ETUSD authority.

A surprise solution
Charter school speakers were prepared for the question about their assets. They repeated that PMLC brought its own money into the district and had not required investment from ETUSD. Treasurer Hawley said they expect that the ADA from their students “will stay with those students.” If the state ever repays some of the “deferred” ADA held back by the California legislature during hard times, “that ADA should follow the students,” and come to the charter school, not the district.

They did not address the question of a possible interruption in their flow of funding while a new charter is being authorized.
As to the issue of securing a waiver or changing locations, the SAC had come upon a surprising solution.

To parents, the thought of taking their children up the Mil Potrero “S” curves about 18 miles to one of the ETUSD school sites near the Grapevine seemed counter to a main reason for starting the community school in the first place.

Still friends, for the kids’ sake
In an interview five days after the board meeting, it was easy for Amy Masuhara to laugh a little about the “divorce” metaphor used by ETUSD Trustee Anderson.

In many ways, the PMLC leader recognized, the words she was speaking did indeed echo the clichés heard in relationship breakups.

But, still, she is totally sincere: “This is all for the kids. There is no negativity toward ETUSD. The reason we are doing this is because of where we are located and what is best for the education of our children. We feel it is in the best interest of the kids to maintain a community school.

“We are still part of this mountain community. Our children will still go to Frazier Mountain High School.

“We still want to be friends.”

A school of choice
The Pine Mountain Learning Center plans to submit its new charter to the state as a K-8, just as their prior charter was filed. The difference is that as an independent charter, they will be able to control their own personnel decisions.

Once approved, Masuhara says, they will be “a school of choice. Anyone in the state of California can come to our school.”
No interdistrict transfers will be required.

This is part of the March 22, 2013 online edition of The Mountain Enterprise. 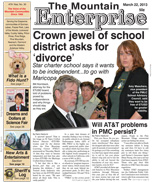 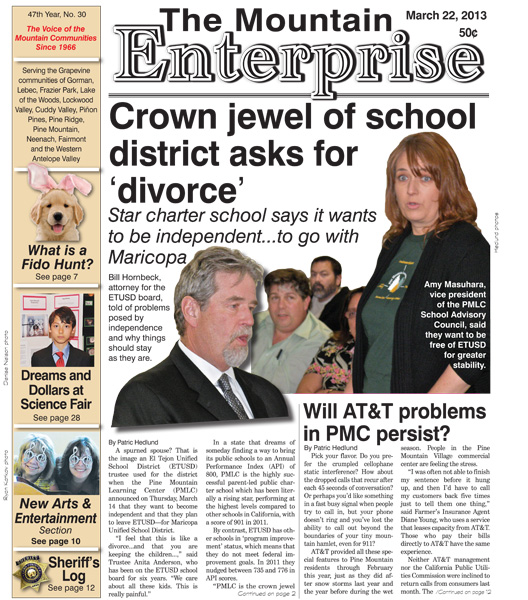