The Mountain Enterprise has requested the actual underlying research to support the drastic reduction in forest density propsed by the decision memo. Instead, Mt. Pinos Ranger District Forester Greg Thompson said in an interview, “Our end goal is to maintain a healthy forest.” He spoke in generalities, saying that having too many trees competing for waning resources, like water, leaves all the trees more vulnerable to drought die-off or attack by the Ips bark beetle. How many trees will go?

A few clicks on a calculator tells the story: this project, which does include a commercial logging component—with no mention of any limitation on building logging roads through the area—aims to reduce the forest density in the Cuddy Valley project area by roughly 80%.

But LPNF has not yet produced the requested scientific data to show the actual inventory of the Cuddy Valley ridges that would justify removal of 80% of existing trees.

“This project was developed in collaboration with local individuals and community groups to establish priorities, cooperate on activities, and increase public awareness,” the press release also said. The Mountain Enterprise requested that Los Padres National Forest public information officer Andrew Madsen explain which “local individuals and community groups” helped to develop this project, and the dates they worked with LPNF.

Forester Thompson and Madsen did not provide names. Thompson referred to the Mt. Pinos Fire Safe Council, which was disbanded. There was a plan from 2006, but nothing we found in that 12-year-old document calls for such an extreme reduction in trees.

Also missing from the LPNF news release is mention of the commercial logging component of this project.

“This decision represents a substantial shift in the way the Forest Service has been proposing, approving and conducting tree-removal projects,” Bryant Baker, Conservation Director at Los Padres ForestWatch, said.

“Unlike past projects of similar size, the Cuddy Valley project includes the commercial removal and sale of trees,” explains Baker. “It has no limit on the size and age of trees that can be removed and it has been approved without preparation of a standard environmental assessment or environmental impact statement.”

The announcement says that the Mt. Pinos Ranger District has “completed environmental review” of this project—but that is one arm of the U.S. Forest Service reviewing another, without public hearings or a National Environmental Policy Act (NEPA) review, with opportunity for negotiation to improve the project.

“We find it misleading that the Forest Service would say they’ve completed environmental review for the project when in fact they used a Categorical Exclusion to avoid preparing a standard environmental impact statement,” Bryant said. “This has also limited the public’s ability to engage in the decision-making process,” he added.

Idyllic Cuddy Valley is nestled between forested hillsides. Plans appear to be moving forward rapidly for Los Padres National Forest to remove up to 80% of these trees with no public environmental review process.

The e-Edition is available now with full photos and stories at The Mountain Enterprise e-Edition. Select the 2018-1207 edition.

This is part of the December 28, 2018 online edition of The Mountain Enterprise. 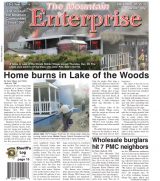 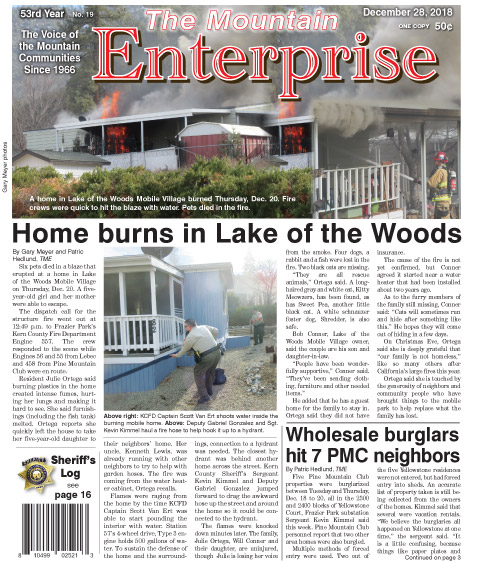