After a four-year investigation that began in December 2016, California Attorney General Xavier Becerra filed a complaint in Kern County Superior Court December 22, 2020. The legal suit alleged that Kern County Sheriff’s deputies engaged in a pattern of conduct that deprived citizens of their constitutional rights and violated the law in numerous categories, using excessive force, unreasonable stops, searches, seizures, and more.

Becerra made that stunning announcement in a joint press conference with Kern County Sheriff Donny Youngblood. The attorney general said the state had reached a “major settlement” with Kern County. The original investigation was opened in 2016 by …(please see below to view full stories and photographs)

This front page from December 2016 tells of California Attorney General Kamala Harris opening an investigation into an alleged pattern of excessive use of force by Kern County law enforcement. Nicholas Covelli was killed in Frazier Park on February 9, 2003, by two gunshots fired on Piru Way by Kern County Deputy David Benson. The Covelli family’s refusal to give up in their efforts to find some form of justice for their son was instrumental in finally bringing scrutiny to the policies of the Kern County Sheriff’s office.

Nick Covelli (left) with mother Patti, sister Lynn, nephew Andy and brother Steve, a warehouse supervisor. NIck’s nephew and niece were the ‘apple of his eye,’ his dad said. The family was determined to learn what led to Nick’s death.

The e-Edition is available now with full photos and stories at The Mountain Enterprise e-Edition. Select the 2021-0108 edition.

This is part of the January 8, 2021 online edition of The Mountain Enterprise. 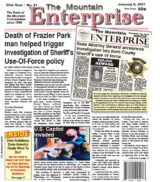 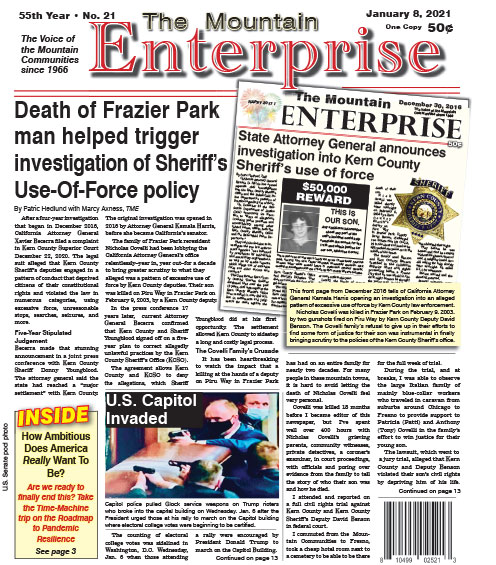