Last week as we were going to press, the Congress of the United States of America was attacked in the U.S. Capitol building by a violent mob that broke windows, battered down doors, smashed through the House Speaker’s office, stole computers and documents, and murdered a Capitol police officer. Some came bearing arms. Outside, there were chants of “Hang Pence,” and “Get Pelosi.” Five people died.

The goal of the mob’s attack was to prevent Congress, the second branch of the United States government, from completing its duty to accept the results of the November 3, 2020, election.

Congressman and House Minority Leader Kevin McCarthy is Bakersfield’s favorite son. He has always been drawn to power, from the days he was an intern for House Ways and Means Chairman Bill Thomas, to his quest to be constantly seen standing beside President Donald J. Trump during the past four years. Now there are calls to hold him accountable for supporting ‘The Big Lie’ and the ‘Stop the Steal’ incitement of angry mobs.

Above: The mob brought weapons, including firearms, tasers, toxic chemicals, mace, tear gas, hockey sticks, flag poles and crutches to beat Capitol police. They used the scaffolding to scale the walls of the Capitol building and enter upper windows.

The e-Edition is available now with full photos and stories at The Mountain Enterprise e-Edition. Select the 2021-0115 edition.

This is part of the January 15, 2021 online edition of The Mountain Enterprise. 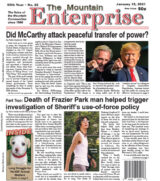 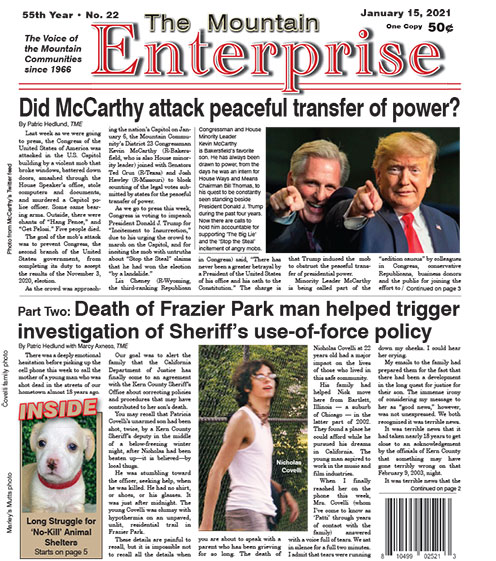