The report says that on Saturday morning, June 12, 2010, Kern County Parks Department workers fired up chainsaws to destroy two heritage oak trees in the parking lot of the new Frazier Park Library site, under construction on Park Drive. It also says that, “…the county acknowledges that it dropped the ball as far as letting the community know in advance when and why the heritage oak trees had to be cut down…”

The remainder of the report is a startling embarrassment for the public to read, as its authors clearly attempt to lay blame for the county’s failures at the feet of the citizens and the community’s newspaper.

The grand jury system in California was created to act on behalf of citizens. It has been given investigatory powers, including that of subpoena, to ensure that it has the tools needed for rigorous investigation of county and city governments. The purpose of these powers is to confirm that government departments are efficiently operated and that public funds are spent appropriately. Past grand juries have provided exemplary service to the people of Kern County.

Howeve, this 2010-2011 Kern County Grand Jury appears to believe its duty is to ensure that government failures are concealed and substantial financial losses due to county negligence remain billed to the taxpayer.

This report’s attempts to blame the public and the local newspaper for the county’s failures to properly manage its contractor should set off an alarm in the minds of all citizens, journalists and public officials who care about accountability. [See “County Was Wrong to Double Pay Contractor,” The Mountain Enterprise, September 10, 2010.]

Here are some troubling examples. The authors of the grand jury report claim: 1) Only one of the two trees removed was damaged by construction activity. 2) The damaged tree roots were outside the required protective radius of the tree. 3) There is a question about whether protective fencing was in place at the time the damage occurred.

Each one of these claims is false. Here are the facts available to the grand jury, but which they did not investigate adequately to learn:

When we called to ask arborist Lopez whether the grand jury had contacted him, he reaffirmed to The Mountain Enterprise that both trees had lost anchorage for support due to 42 inches of grade lost to construction activity and that one of the trees was leaning because of that loss of anchorage and support. He said the cavity in another of the trees was, of itself, not enough reason to remove the tree as the grand jury claims. “The root loss and damage is mainly what caused it,” Lopez said.

2) Root damage from grading the heritage oaks was absolutely not outside the protective radius of the trees, as the grand jury claims. According to arborist Lopez, the damaged roots were “five to six feet from the trunks of the trees.” A photo with this story shows a large drainage channel excavated by the contractor that is well within the are beneath the tree that was supposed to be protected under the terms of the contract. The architect’s orders (on page LPD-1) are unmistakable, and a part of the contract. The photo above shows fencing which violated the architect’s orders for tree protections. Excavation which is clearly prohibited in the contract is what fatally damaged both trees.

Lopez told The Mountain Enterprise that the grand jury never contacted him for their report. This grand jury asked no questions about the trees from the proessional who is most qualified to provide accurate information.

3) The only reason there would be "question" about whether protective fencing was properly installed would be because the grand jury did not bother to adequately research the subject. For those who live here and have documented this public building site for a year, there is no doubt whether proper protective fencing was in place when the trees’ roots were damaged. It was not.

The second photo with this story shows token fencing that violates the specifications on page LPD-1 of the contract. This breach of contract allowed heavy equipment to drive over tree roots, grading down three and a half feet right next to the tree, according to the arborist.

The grand jury’s failure to mention that  the contractor operated in violation of its contract for eight months, by failing to erect protective fencing according to specifications (five feet beyond the drip lines of the trees), makes it clear that something is amiss within the Audit and Administration Committee of the Kern County Grand Jury.

Serious questions about how the county failed to perform its oversight duties and how it allowed the contractor to charge taxpayers an unnecessary $70,000 in change orders are not asked by the grand jury.

Instead, with twisted logic, the grand jury blames citizens. One of their findings: “The basic problem appears to be the fact that many residents do not bother to find out what is going on and these are the folks that complain the loudest when something happens they did not know about.” In fact, information was purposely withheld from a very concerned community about the county’s plans to remove the trees they had promised to preserve.

The grand jury authors then take aim at the real target of their report: this local newspaper.

The report seeks to defame the newspaper with no specifics. The one example they vaguely indicate is false, apparently written without checking their own facts or interviewing this newspaper to confirm the research and documentation that is the basis for our reports.

In fact, the grand jury made no attempt to contact The Mountain Enterprise. The failure to contact us directly before making these charges is a troubling comment on the intentions and methodology of those who researched and wrote this report.

California Newspaper Publishers Association Legal Counsel Jim Ewert said he has never seen a grand jury report that was so lacking in facts. “It reads like a press release from a PIO (government spokesperson),” he said.

“They do not delve with any depth into what the county did or didn’t do. It doesn’t go into any depth at all as to whether the county’s actions were in compliance with the construction contract. They did not discuss anything about the requirements of the contract.

“You cannot do a report like this unless you look at the contract, the terms of the contract, what the county did and what the contractors did. This is wholly inadequate. It is very superficial. They do not even allege what specific fact [the newspaper ] got wrong. It is a series of conclusory statements without any support,” Ewert said.

The grand jury report says citizens should stop relying on their local newspaper for information and instead obtain their news from a soon-to-be-created Municipal Advisory Council (MAC) website.

As our readers are aware, members of the MAC were hand-picked and appointed by Fourth District Supervisor Ray Watson. He has expressed displeasure with this newspaper’s independent analysis of some of his positions.

“The statement that the grand jury makes with respect to mountain residents not relying on the local newspaper as its source of information is not only inappropriate coming from a government entity, but egregious, especially following what happened in the city of Bell [where city officials paid themselves millions of dollars in tax funds for years without oversight. —Editor].

“This report reads like the Wizard of Oz: ‘Don’t look at the man behind the curtain.’ The word ‘egregious’ doesn’t even capture it.”

Instead, this report defends the government, applauds Supervisor Watson and attacks the citizens and the newspaper, all with statements that are shocking in their shallowness.

“Whoever made the decision to do this did no favors for the Kern County Grand Jury,” attorney Ewert said. “Could you imagine a criminal indictment that emanated from a grand jury report like this? If I was a defense attorney, I’d say ‘Wow, this is going to be a great year!’

“It calls into question the integrity of the entire grand jury process in Kern County.” Ewert summarized.

[See the complete grand jury report, along with our notes outlining specific factual errors, at www.MountainEnterprise.com. We will also print out copies of the grand jury report with our annotations upon request for any of our readers, and for MAC members, to post in prominent places.]

This is part of the December 17, 2010 online edition of The Mountain Enterprise. 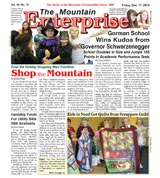 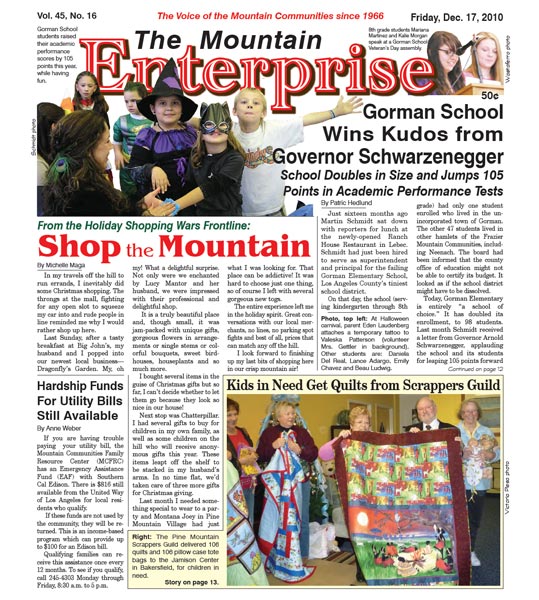