UPDATE—FRAZIER PARK, CA (Saturday, Nov. 24, 2018 at 7:42 a.m.—The death toll in the Camp fire has now reached 83. Hundreds are still reported missing and unaccounted for. Rains of the last two days have helped firefighters establish 95% containment, but have hindered search for casualties in the ashes of the devastated town.

UPDATE—FRAZIER PARK, CA Tuesday, Nov. 20, 2018 at 7:28 a.m.)—Cal Fire reports that the death toll in the Camp fire in Butte County is 79 and the number of homes destroyed is 12,637, while commercial while 483 commercial buildings have been destroyed.

UPDATE—FRAZIER PARK, CA (Sunday, Nov. 18, 2018 at 8:21 a.m.)—Butte County’s death toll increased yesterday to 76 with the number of missing rising to 1,276, mostly in the Town of Paradise. About 9,700 homes have been destroyed. Southern California’s Woolsey fire has destroyed more than 1,000 structure and killed three people.

UPDATE—FRAZIER PARK, CA (Tuesday, Nov. 13, 2018 at 8:30 p.m.)—This evening the death toll in the Paradise Camp fire rose to 48, with hundreds still missing. The Mountain Enterprise is working on a report about local families’ preparation plans to stay safe in the event of a local fire. See it on newsstands Thursday morning.

UPDATE—FRAZIER PARK, CA (Tuesday, Nov. 13, 2018 at 8:45 a.m.)—The Camp fire in Northern California has now claimed 42 lives and more than 200 are missing. More than 7,600 homes have been destroyed. Reports of two more deaths in the Woolsey fire in Southern California could bring that total to four. More than 400 homes have been destroyed in the Woolsey fire. Over 250,000 were evacuated.

UPDATE—FRAZIER PARK, CA (Monday, Nov. 12, 2018 at 7:50 a.m.)—Southern California Edison has reported to the California Public Utilities Commission that the “Big Rock 16 kV circuit” from its Chatsworth substation malfunctioned at 2:22 p.m. on November 8. The Woolsey fire was reported to 911 at about 2:24 p.m., two minutes after the utility’s reported malfunction. Edison reported that the incident occurred “Near E Street and Alfa Road” in Ventura County, which is just south of Simi Valley. The Woolsey fire burned to the beach in Malibu within 48 hours, destroying 100 homes in its path [now 1,000 structures]. In Northern California, Pacific Gas & Electric reported an outage in its electric utility system near the origin of the Camp fire just minutes before that fire was reported. The causes of both fires are officially unknown at this time. As of this morning, the death toll in the Woolsey fire is two. The death toll in the Camp fire, in Paradise, CA, this morning rose to 29 with 100 people still missing.

UPDATE—FRAZIER PARK, CA (Sunday, Nov. 11, 2018 at 7 a.m.)— Once again, above-ground utility lines are implicated in still another horrifying eruption of wildfire in California. The death toll has risen to 23 in Paradise, CA, with 100 people still reported missing. The retirement town has a population of about 26,800. Rescue workers and coroners’ searchers are combing through the ashes while the fire still burns.

In Malibu, residents clustered on the beach near Point Dume to escape the flames engulfing their homes. Two deaths were reported on Mulholland Highway on Saturday. Neenach photographer (and retired San Luis Obispo fire captain) Jeff Zimmerman has sent photos and an update from the front lines of that fire: “Approximately 70,000 acres, 2 fatalities, 150 homes either destroyed or severely damaged, 200,000 people evacuated. Malibu was ground zero yesterday. I recorded extreme fire behavior and two huge fire whirls during the blow up.”

“Critical wind conditions [are expected] on Sunday,” Zimmerman continued, “as another Santa Ana wind may set up. Live stock was found running down the street and was gathered at the beach by a life guard tower. Falling water pressures in Malibu are a problem in the hydrant system thwarting firefighting efforts. Power was out in much of the fire area.”

UPDATE—FRAZIER PARK, CA (Friday, Nov. 9, 2018 at 9:04 p.m.)—According to an incident report from the California Public Utility Commission, there was an outage in Pacific Gas & Electric’s transmission lines near Pulga Road in Butte County, close to the Camp fire’s ignition point at about 6:15 a.m., minutes before the fire started. Tonight, nine people are confirmed to have died in the fire, so far.

UPDATE—FRAZIER PARK, CA (Friday, Nov. 9, 2018 at 2 p.m.)—Malibu residents have been warned to leave immediately as flames burn hillside homes and thousands try to flee on a gridlocked Pacific Coast Highway, according the Los Angeles Times. Five are reported dead in the Camp fire in Paradise, Northern California.

UPDATE—FRAZIER PARK, CA (Friday, Nov. 9, 2018 at 10:55 a.m.)—Residents of more than 75,000 homes have been ordered to evacuate as the Woolsey fire jumped the 101 (Ventura) Freeway and is charging into the mountains north of Malibu. The Camp fire in Paradise, California has claimed multiple lives and burned 70,000 acres, according to Butte County officials as reported by the Los Angeles Times.

LEBEC, CA (Thursday, Nov. 8, at 5 p.m.)—Lebec residents were calling neighbors and The Mountain Enterprise today about intermittent smoke in their area. There are no fires reported in that region, but three bad fires are reported in California this afternoon, driven by Santa Ana winds—one north on the Interstate 5 near Chico.

The retirement town of Paradise, CA (up the Interstate 5 in Butte County) is being devastated by a firestorm that is said to have started by a campfire [update: the cause is now is thought to be related to a PG&E power line malfunction] flung into a deadly conflagration by high winds, taking down an estimated 1,000 structures and leaping quickly to 10,000 acres. Then, at about 2 p.m. this afternoon, two fires in Ventura County began racing toward populated areas: a fire near Camarillo Springs and another near Newbury Park. Both are causing evacuations.

Chuck Noble, formerly of Lebec’s Los Padres Estates, is telling his friends tonight about the Paradise fire. Some residents were trapped, Noble reports: “My brother lives there and he was able to get out, but he has a business there. The home where my folks lived is gone, as is most of downtown, the school and the hospital. My brother got out on 4×4 roads through the back country, as traffic was jammed on main roads. The cemetery where my folks are buried is burned, as are all the shopping areas. My brother said high winds with flames several hundred feet high were flying through the trees. It is real bad situation up there. They need our prayers. My brother just finished rebuilding his restaurant after a fire destroyed it a year ago. Now it may be gone along with his house. Thankfully, he had just increased his insurance. It is thought that the fire started from a campground in Feather River canyon.

This is part of the November 23, 2018 online edition of The Mountain Enterprise. 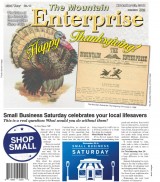 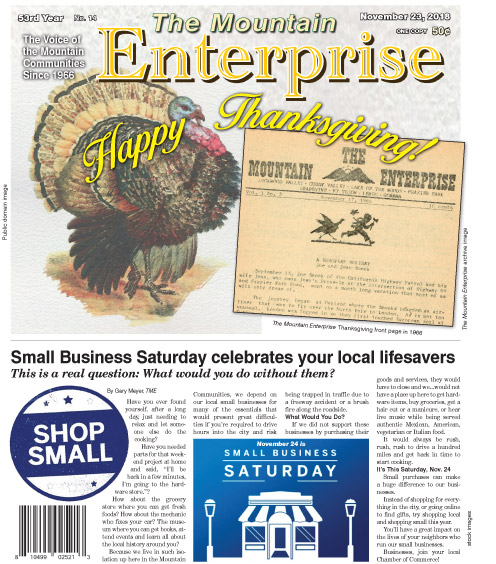