A startling 244 workers may have been laid off, or ‘furloughed’ from First Solar’s Antelope Valley Solar Ranch One (AVSR1), according to figures compiled from official spokespersons and several sources concerned about what appears to be a “dig in the heels” spat between AVSR1 management and Los Angeles County building inspectors.

“On Wednesday, the electrical inspector for the county of Los Angeles was denied access to any of the PCS (power conditioning system) structures,” an electrician with over 20 years of professional experience in L.A. County reported.

“First Solar denied the electrical inspector access to these [equipment] shelters that need to be inspected. That is what brought all of these furloughs for us [union electricians working through Conti Electric, Inc. based in Nevada*] and the layoffs for First Solar May 25. The electrical inspector shut down all deliveries of electrical and mechanical [supplies]. We were told this by our supervisor. It has affected me and my fellow electricians,” he said, asking that his name not be used, to protect his employment. He said that an official, written statement was read when the furloughs were announced, and that the fuller details were then provided orally.

Another allegation circulating among workers is that a restraining order was placed against a former AVSR1 construction manager (with an extremely hefty build) due to a scuffle with a county inspector over the report that AVSR1 is not using Underwriters Laboratory (UL) approved components on their photovoltaic modules.

Search of public legal documents by The Mountain Enterprise has not verified the claim about a restraining order, but the manager was hastily transferred from the AVSR1 site and a replacement manager was brought in over a month ago.

AVSR1 is located in the western Antelope Valley, on about 2,100 acres near 170th Street West in the area straddling Neenach and Fairmont, adjacent to Highway 138 (also known locally as Avenue D).

First Solar, Inc.’s stock plummeted from its 52-week high last July of $140 per share to $35 and then $23 after an initial hold-up by L.A. County inspectors over grading standards at the AVSR1 site. Wall Street analysts were frantically calling The Mountain Enterprise and rural town council members to try to assess the situation. The stock value collapse reflects a complex of significant world economic conditions in Europe and China in addition to local issues. This week the stock has hovered just above $11, triggering speculation about acquisition or hostile takeover bids for the company.*

AVSR1 was sold to Exelon Inc. days after U.S. Department of Energy (DOE) loan guarantees of $646 million were confirmed for the project. Under the agreement with Exelon, First Solar is the general contractor to build the solar farm and to operate it.

But just after the first quarter of 2012 the company fell into what is now a 2.5 month dispute with inspectors regarding use of UL certified hardware in L.A. County installations. First Solar’s cadmium telluride (CdTe) thin film modules are not UL certified.

Showing visible irritation with L.A. County inspectors, AVSR1 Project Director Anthony Perrino claimed in a community meeting in early May that utility-scale facilities are not mandated to use UL certified components and that “this problem has not come up at any other site in California, other states, Canada or Europe.”

Kerjon Lee, Los Angeles County Department of Public Works spokesman, replied on Wednesday, May 30 to an inquiry by The Mountain Enterprise about these statements.

“We’re not focusing solely on the UL approval issue,” Lee said, “Our focus is on compliance with the health and safety standards of Los Angeles County. We continue to talk with First Solar on a regular basis. As of yesterday (Tuesday, May 29) we had not received the documents required to move forward with the permitting [process].”

Electricians have complained that AVSR1 spokesperson Adam Eventov has not mentioned the loss of over 75 electrician’s jobs in his comments over the Memorial Day weekend about layoffs. Eventov returned calls from The Mountain Enterprise over the holiday, “to be sure that we help you get the numbers correct.” Other media outlets have reported 120 layoffs.

The Mountain Enterprise reported in an online Breaking News report that Eventov confirmed that 140 workers were laid off on Friday, May 25 after 25 were laid off on April 25, for 165 construction personnel layoffs in a month.

“I don’t have a breakdown, but it will mostly be the people who are structural steel guys being handled by CLP [the Van Nuys-based labor contractor, CLP Resources, Inc., used to hire local employees],” said Eventov, “those hammering the posts into the ground. We still have guys putting in the power transfer station and lots of water trucks.”

But electricians say that of an estimated 102 from their union who were working at the site this year, only about 23 are left on the job. That would add about 79 additional workers not on the payroll.

The total jobs lost appears to be about 244 laid off or furloughed— close to the full workforce.

“My running joke is that they don’t need a communication consultant, they need an exorcist….” Eventov laughed ruefully Saturday, May 26, referring to the series of events that have plagued the building of the 230 megawatt facility.

Addressing who has been laid off, Eventov said: “This is a lot of pain for micro-local workers and those throughout the Antelope Valley. This [the dispute with the county] has gone on so long that, on the plus side, when we get this module thing worked out….we will have to put on extra workers to catch up on the construction schedule."

The term "micro-local" refers to residents who are neighbors to the plant living less than 30 miles away—in Neenach, Fairmont, Three Points and Antelope Acres, plus Lebec and Frazier Park.

Meanwhile, the facility is also having ongoing problems controlling dust. Some workers have filed a suit regarding labor and safety issues. Residents have been adamant for months that using water and a chemical stabilizing additive to create a crust over the graded dirt is not working to control the blowing walls of dust stirred up at the work site.

___________
*Adjustments were made to these paragraphs after this story was first posted.
Conti Electric, Inc. is based in Nevada and the $140 / share price for FSLR stock was its 52-week high, but not its value when the difficulties began with L.A. County. By then the stock value was descending south of $35 per share.

This is part of the June 01, 2012 online edition of The Mountain Enterprise. 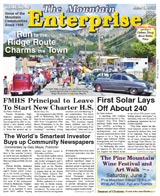 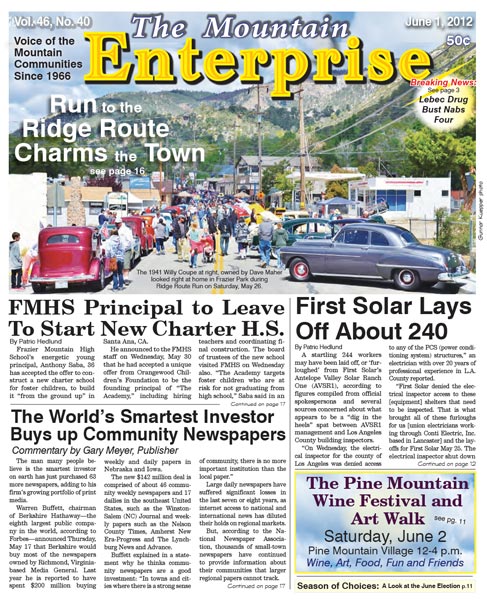