The way the Frazier Mountain High School Falcon Football coaches see it, the unity within a team is just as significant as their talent. How the players come together as a unit, their desire to work hard for one another, and help one another, is the recipe for success.

We have been working the players hard since Spring Practice began in May. This summer the team has been practicing three hours a day, four days a week with only a two-week break. All the players are gaining weight and are increasing their strength and endurance with the training program we have them on.

An advantage this year that we haven’t had before is the eight coaches we have on staff. This gives the players the opportunity to learn more and to learn faster, which gives them the confidence that they need to be successful.

Head Football Coach Jarudd Prosser and his staff know that each one of our players on the JV and Varsity squads are committed to their team’s success.

All the players have worked hard the past two months. The results of this effort will be evident on the football field starting September 5 when we begin our season against Mojave High School at home.

The success we had last year gives the team the encouragement to work even harder than they have in the past.

If we are successful at remaining a unified team, the Falcons have a chance to again have a successful season. We lost some key players to graduation this year. But we have many returning players who have grown in strength and talent.

The coaches are very happy to have several juniors on the team who are very good athletes. We just have to do a good job of coaching and putting them in the right places. Returning Juniors like Alec Gotts, Josh Carlson and new Varsity players like Mike Morgan, Camron Rincon, Kyle Hessel, Andrew Jens, Josh Kern, Matt Roy and Jeff Wagner will add a lot of speed and strength to both our defense and offense.

The Falcons are riding the confidence of an outstanding 2007 season. The coaching staff did a commendable job in gameplanning and preparation, but also in building a unified group. It will take another cohesive unit to gain a playoff berth this year.

The coaches are hoping that this year’s team takes a lot from what transpired last year, building on character, unity, success in the classroom and success on the field, to mold that into not only a successful season but a season where each individual grows both physically and as a young man.

The FMHS Falcons and their coaches would like to thank the parents, teachers and community members for the commitment and sacrifices they have made in support of the football program. We invite all of you to come out and cheer your Falcons on to victory.

This is part of the August 01, 2008 online edition of The Mountain Enterprise. 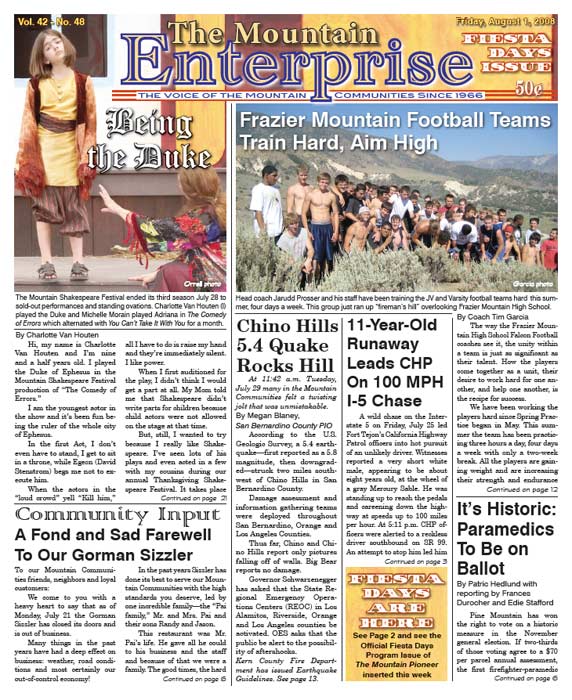