On January 3, 2020, Frazier Park resident Belinda Woerter and her dogs were savagely attacked by a canine belonging to her neighbor, Eric Futrell.

Woerter believed the animal, known as “Daisy,” to be a wolf or wolf hybrid. Futrell had referred in a December 2019 Facebook post to “my wolves” and was known to have offered wolf pups for sale.

Kern County Animal Services, however, deemed Daisy to be a “normal size shepherd-husky of about 50 pounds.” There are questions about how thoroughly they investigated the animal. They left it in Futrell’s custody, at his home, to be quarantined for 10 days for possible rabies.

Today the animal is in Ventura County Animal Control’s custody. They call it a wolf. On March 6, Ventura County Sheriff’s deputies responded to a report of an abandoned canine tied to an unused gate in Lockwood Valley, next to…(please see below to view full stories and photographs)

On March 6, the same day Ventura County Animal Services picked this animal (top) up from where she was tied to a gate on Curtis Trail in Lockwood Valley, a Ventura County Animal Shelter listing appeared online (right). The Woerter family took this photo of Daisy (Inset, above), roaming free in the neighborhood, on December 29, 2019. The Futrell animals were often reported to be running loose.

Above: The injuries to Belinda Woerter’s leg required surgery and 14 staples to close. She was diagnosed with PTSD six days later.

Above: On January 25, sheriff’s deputy Matt Alvarez met up with Crystal Flores (at left with hooded jacket) at the library parking lot after a domestic violence call involving Flores and and boyfriend Eric Futrell.

The e-Edition is available now with full photos and stories at The Mountain Enterprise e-Edition. Select the 2020-0313 edition.

This is part of the March 13, 2020 online edition of The Mountain Enterprise. 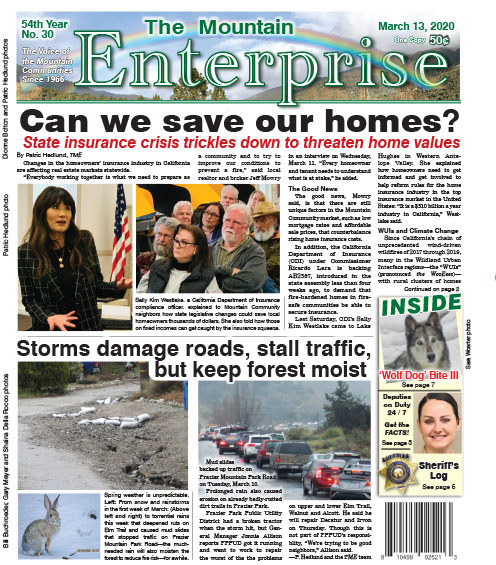