Ruth Ralphs was honored for 33 years of service to the Gorman School District at a luncheon held at the elementary school on January 18.

Over 40 people were in attendance, including Los Angeles County Supervisor Michael D. Antonovich and community leaders such as Gwendolyn Farrell, President of the Antelope Valley School Boards Association.

A ceremony was also held on Tuesday, Jan. 22 at the Los Angeles County Board of Supervisors where Ruth was presented with a plaque for her service to the students of Gorman School.

During many of those 33 years, Ruth also managed Ralphs’ family enterprises (such as gas stations, motels, a cafe, grazing rights and an antenna) while serving as postmistress of the Gorman Post Office.

The family founded the school originally as the Quail Lake District. Classes were held in the Ralphs’ family living room.

The school was relocated to its present site and built on land donated by the Ralphs family, where it became known as the Gorman School District.

Ruth follows a tradition of dedication to the children of the district. Mary E Ralphs served 57 years (from 1908 to 1965) and was honored for her service by Vice President Hubert Humphrey at the National School Boards Convention.

This is part of the January 25, 2008 online edition of The Mountain Enterprise. 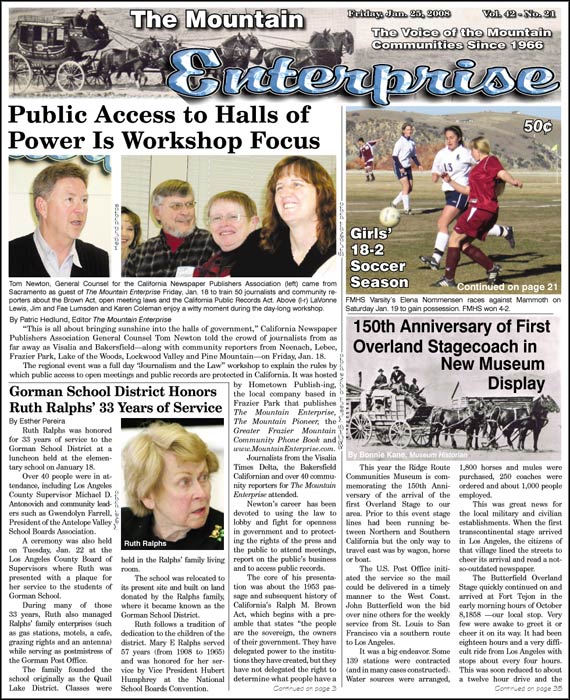