As Kern County Fire Department (KCFD) crews arrived, they observed smoke coming from first-floor windows of the three-story building. They immediately called for a second alarm. Engine 56 made the initial attack on the flames, while personnel from Engines 55 and 57 evacuated the building.

The fire was caused by a clothes dryer fire in a first floor laundry room. Fire sprinklers helped to keep the flames from spreading beyond the laundry room. There were no injuries.

This is part of the April 06, 2012 online edition of The Mountain Enterprise. 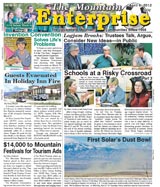