It is probably not a great thing to know that the guy who holds the purse strings to your community foundation is also known around the region as the guy who “Boss Hoggs this whole neighborhood.”

For those of you who are not now and never have been a fan of The Dukes of Hazzard (such as myself), a quick search of Wikipedia reveals that the 1980s-era TV series featured this popular comic character.

Boss Hogg is described as “the greedy, unethical commissioner of Hazzard County,” a fictional land in Georgia with madcap antics and cartoonish villains.
I have now learned all these choice tidbits of 1980s popular culture because I happened to be looking at a fairly remarkable letter from an attorney.

In the letter, Ramoncito Pollete Ocampo tells why a candidate invited to be on the first electoral ballot issued by the Oso Town Council in five years (yes, five years­)—a local homeowner within the Neenach area, registered voter and citizen of the United States, was told a week after the election that she has been “disqualified.”

Perhaps I didn’t mention that the candidate, Lisa Grijalva, is Equestrian Director for the Painted Turtle summer camp program in Lake Hughes, for children who are faced with life-threatening and chronic illnesses. Grijalva is also outspoken about the need for improvements in her community. Her manner is not argumentative. It is cheerful and factual. She is clearly an independent thinker with charisma.

Perhaps I also failed to tell you that the Oso Town Council held the candidate meet and greet on June 8 and the election on Saturday, June 15 from 8  a.m.  to 8 p.m. To this day, the results of that election have been hidden from the community that the council allegedly represents.

No one has been allowed to see the number of people who voted (estimated to be about 25 or fewer), or to see the ballots, or to see how many  votes each of the five candidates won or to see an announcement of the winners who will be serving on the council.

The same “lawyer’s opinion” letter goes on to explain why a citizen of the Philippines who has been a longtime employee and protegé of Richard Skaggs (the current president of the unelected council with apparent control of the community foundation), who came to live in the area in January at Skagg’s invitation, should be allowed to serve on the Oso Town Council.

It is likely a dozen attorneys you might bump into at random on the Metro might easily point out that Ocampo’s opinion letter appears to twist legal logic into a few dozen pretzel positions to arrive at his conclusions, especially because neighbors in the Oso area are reporting that there have been five different sets of governing documents for Oso presented to the community in the past few years.

The set given to Ocampo is from 1992. That is not the same document that was on Oso’s Town Council website (actually Richard Skagg’s website, for his Omstar Plaza and Neenach grocery store) within the past 60 days. The documents were recently removed from the website, according to Neenach area residents.

Yes, it is confusing.

What is it not? It is not reassuring. It appears that a free and fair election has not yet been held for the Oso council.

You can see this entertaining letter for yourself at right. Double click to bring it to full size, then click through to see the full set of pages.

Boss Hogg, beloved comical villain of The Dukes of Hazzard.

The e-Edition is available now with full photos and stories at The Mountain Enterprise e-Edition. Select the 2019-0628 edition.

This is part of the June 28, 2019 online edition of The Mountain Enterprise. 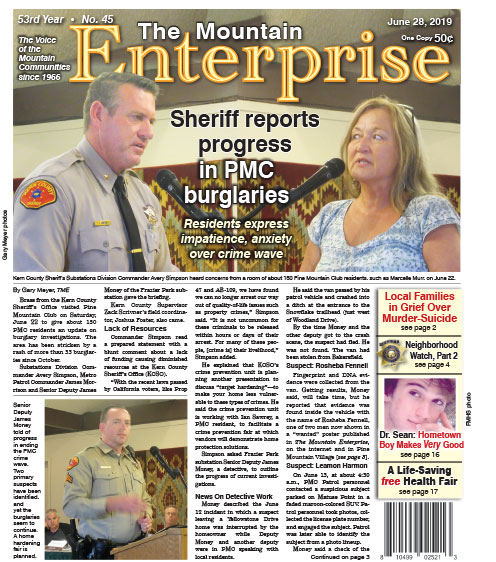