It was a fabulous season, with great accomplishments and tremendous success.

The Frazier Mountain High School girl’s soccer team won an overall record of 25-4, took second place in the High Desert League, first place at the Taft Tournament, first place at the Garces Holiday Tournament, rated Number Three in CIF Southern Section Division VI, and made it to the third round or quarter finals of playoffs, which means they were in the top eight in all of Southern California. What a season to remember!

They ended their season with a great game against St. Margaret’s Episcopal School, losing 1-0. The game was on an artificial turf, the first time these girls had played on such a surface. It was a gorgeous setting, with a pristine field and equal competition.

With just thirteen minutes to half time, the Tartans took a corner kick and their sixfoot senior was able to tower over our girls and head the ball into the goal. During the game, both teams took equal control of the ball and both took good shots on goal. Both goalkeepers were able to stop every shot—except that one fatal score.

Once the Tartans scored, they played a secure game by beefing up their defense and kept us out of shooting range, playing a long ball out of the backfield every time they could get their foot on it. The Falcons were not able to come back, but did an amazing job.

Earlier in the week, the girls easily won a 5-0 victory against Thatcher, a private school out of Ojai. That was a home game with rough weather, which was really to our girl’s advantage. During that game it rained and then hailed, snowed and then rained again. At half time many spectators were scurrying to get their cars in order to keep dry and watch the game.

In this game Jenny Karson scored two goals, with one assist, Cheyenne Thompson had one goal, Ashley Lynn scored a goal, with two assists and Shelly Birtell had two assists. It was a great team effort and sweet revenge, as this was the team that beat us by 1-0 in last year’s playoffs.

This year we had three standout players who received team recognition as the Most Valuable Players, they were forward Shelly Birtell, forward/midfielder Jenny Karson, and goal keeper Callie Willoughby.

This is part of the March 14, 2008 online edition of The Mountain Enterprise. 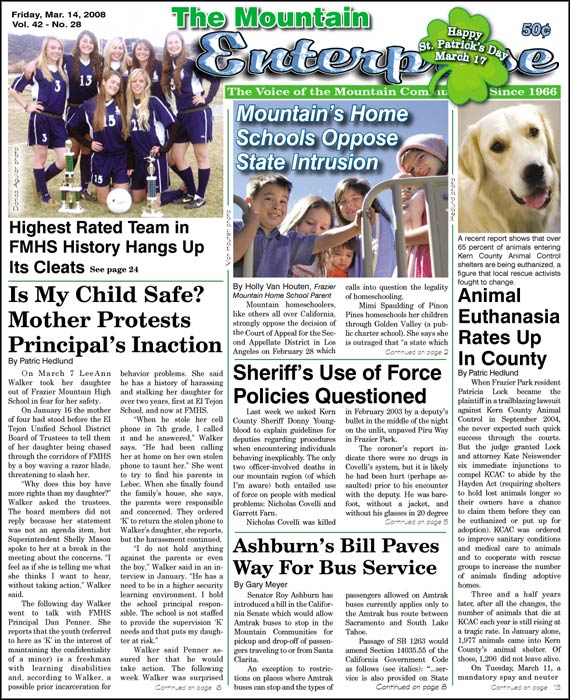