A proposal was introduced to the Tejon-Castac Water District (TCWD) Board on Thursday, March 11 to authorize a Community Facilities District created last month to issue up to $250 million in bonds.

The bonds are to fund infrastructure on the ranch where Tejon Mountain Village will begin to build first. That is called Improvement Area One [see map on page 11].

Attorney Paul J. Thimmig is bond formation counsel for TCWD. He explained the funds are to finance construction of “wastewater facilities, a water storage and distribution system, roads, firehouses, a sheriff’s station,” and more.

The board estimated the bonds could be issued next year, “after vertical building has started,” Thimmig said. He explained with a laugh that those who buy bonds “want to see sticks coming out of the ground.”

In other words, it appears that building on Tejon Mountain Village may begin this year, to position the company to issue bonds to finance significant further infrastructure.

The second area, Improvement Area M, was authorized to issue bonds up to $1.5 billion “for future phases of the development,” Thimmig said.

Another resolution was introduced to authorize placing a tax on the parcels in the Mountain Village Community Facilities District (CFD).

A “public hearing” was held before the vote to authorize the bonds, but no member of the public except The Mountain Enterprise attended the Zoom hearing. Notice of the meeting was run in Bakersfield, we were told, not in the local newspaper where adjacent neighbors or Tejon Ranch inholding owners might be informed.

“It only affects the ranch, why would they care?” one of the board members said on the Zoom audio. It was not possible to see who was speaking.

Tejon Ranch COO and corporate treasurer Allen Lyda said the Mountain Village Public Improvement CFD footprint had been drawn to exclude inholding properties. Lyda said if they wished to be included in the district they would be able to petition to be included later.

Tejon Mountain Village is described as a high-end planned resort community of 3,450 multimillion-dollar homes, up to 750 luxury resort hotel rooms, golf courses and two heliports. The Kern County Board of Supervisors authorized the plan in 2009.

Tejon Ranch Company sought to limit litigation from environmental groups against the project by negotiating to form the Tejon Ranch Conservancy to preserve 243,000 acres. The developer agreed to fund the conservancy with about $800,000 a year. Amid fanfare, Gov. Arnold Schwarzenegger bestowed an award to TRC as an environmental champion.

The e-Edition is available now with full photos and stories at The Mountain Enterprise e-Edition. Select the 2021-0319 edition.

This is part of the March 19, 2021 online edition of The Mountain Enterprise. 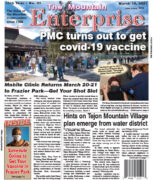 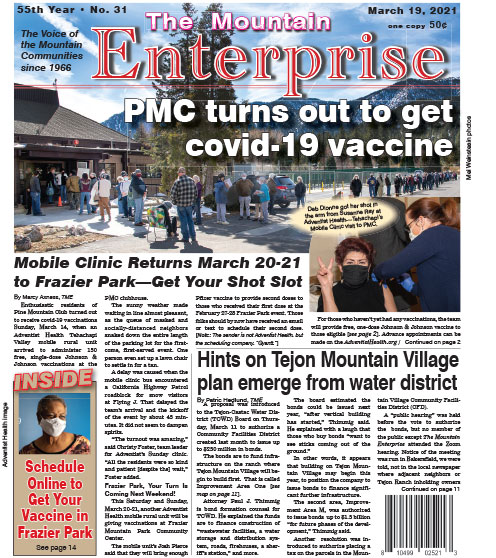