House Minority Leader Kevin McCarthy has been attracted to power since he was a 22-year-old intern at the Bakersfield office of Bill Thomas, U. S. House of Representatives Ways & Means Committee Chairman—one of the most powerful Republicans in the United States at the time.

In The Thomas Slip Stream
McCarthy was an attentive student. The young man’s trajectory toward power closely mapped that of his mentor.

In 2002 McCarthy was elected to the California State Assembly seat that Thomas once held. The entire San Joaquin Valley Republican infrastructure seemed to cheer him on.
To the GOP faithful in the region, McCarthy became known as “Our Boy Kevin.” Democrats didn’t even bother to run an opponent against him for his second term.

In 2006, after Bill Thomas had served 16 terms in the House of Representatives, he decided to retire. There was no question which Republican would win his seat in Congress.

McCarthy got 85% of the primary votes. At 41 he waltzed into the role of Congressman as a rising young star ….(please see below to view full stories and photographs)

A McCarthy staffer and a young intern hold a paperback book cover displayed in the Congressman’s Washington D.C. office in 2012 as the government was about to be closed down as a political tactic. It threatened many of his constituents.

Source: Washington Post survey of the 30 corporate political action committees that gave the most money to the 2015-2020 campaigns of the 147 election-objecting U.S. lawmakers, as identified by data from the Center for Responsive Politics.

Above and Top Right: Kevin McCarthy in his Washington, D.C. House Whip office, where the eyes of Abraham Lincoln dominate his sitting room, as he whips votes to close down the government in 2012.
Right: Constituent Dick Albright of Lockwood Valley with Congressman McCarthy at a campaign event.

The e-Edition is available now with full photos and stories at The Mountain Enterprise e-Edition. Select the 2021-0122 edition.

This is part of the January 22, 2021 online edition of The Mountain Enterprise. 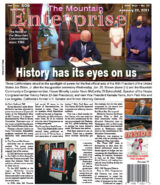 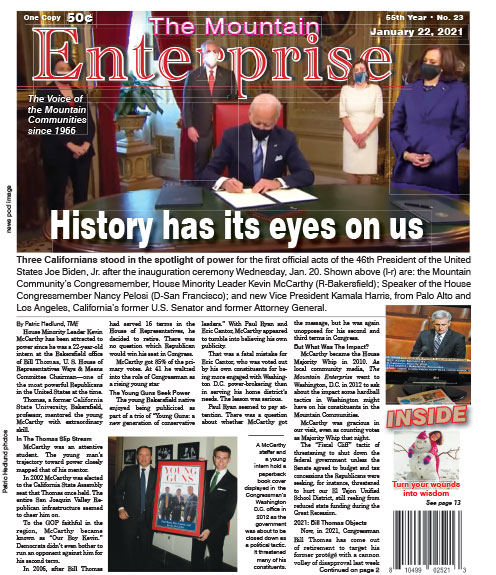