“We’re new, we don’t know the law,” Lebec County Water District President Julie McWhorter told those at the LCWD board’s June 11 meeting. She was explaining to customers why she did not post the latest Kern County Grand Jury report for the public’s review.  McWhorter was appointed to the board on February 1, 2010. She has served for 3.3 years so far. She has been board’s vice president or president since January 2012.

Customer Dolores Griffin told the board on June 11 that she visited the LCWD office to pay her bill on June 7. While there, she asked to see the most recent of four grand jury reports delivered to the district since January 2012. Griffin said she was told the newest report, dated May 14, 2013 “is not available” at the office for public viewing.

Like the three previous reports over the past 17 months, the May 14 report was issued while Julie McWhorter served as an officer.

In three of them, grand jurors noted—among other concerns—that they were met by “obstacles, resistance and a certain

degree of hostility.” Those attitudes are also displayed toward the public and the press.

The May 14, 2013 grand jury report criticized the LCWD board for not properly responding to their prior reports. They also said: “The current board secretary/treasurer should recuse [herself] from any and all discussion and/or voting by the board concerning the 12” line.”

Millie Karr, the board member in question, has refused to recuse herself. Her husband, Bob Karr, was briefly a member of the LCWD board when the private 12” line was constructed without following board policy, according to the grand jury. The private line was connected to the public water system by Karr and another board member without alerting the rest of the board or the public, defying the board’s own policies. Bob Karr could face civil liability if a problem occurs with the line. Meanwhile, this new board is being urged to adopt the line. If it does, liability will be with the water district and its customers, rather than Karr.

In 2012 the grand jury advised: “get training or resign.”

Each report carries in its concluding paragraphs the same statement: “The Lebec County Water District should post a copy of this report where it will be available for public review.”

McWhorter explained that she was unaware of that. “I didn’t read it…I didn’t read all of the report,” she said.

This is part of the June 21, 2013 online edition of The Mountain Enterprise. 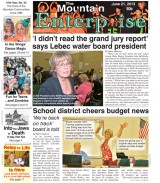