FRAZIER PARK, Calif. (Wednesday, Sept. 30, 2009, 8:45 a.m.)—Local indian tribe the Kawaiisu has given notice to the Kern County Board of Supervisors that Tejon Ranch Company’s proposed Tejon Mountain Village development would be an encroachment on tribal reservation lands. In the notice, dated September 28, 2009, tribal Chair David Laughing Horse Robinson informed the board that the Tejon Indian Reservation (a.k.a. Sebastian Indian Reservation) was established by an act of congress and that no act of congress exists terminating the reservation. The notice cites numerous treaties with the Kawaiisu tribe, as well as congressional acts to support its claim. The notice is copied below.

A video about the Kawaiisu and its claims, produced by tribe historian Kate DeVries can be viewed at this website: http://www.youtube.com/watch?v=htBTd-O9Gu0

To: Kern County Board of Supervisors
1115 Truxtun Avenue, Bakersfield
State of California

Reason: Notice of ownership of the Tejon/Sebastian
Reservation

This is a notice to inform the Kern County Board of Supervisors that the proposed location of the Tejon Mountain Village Development is an encroachment of the U. S. Patented property of the Kawaiisu Tribe of Tejon Reservation known under many Congressional Acts and Executive Orders as Tejon and/or Sebastian Indian Reservation. These Acts and Orders have been publicly noticed to Kern County, Mariposa County and the State of California and acknowledged through many official publications and postings such as the Historical Marker at Grapevine, CA. The Kern County Superintendent of Schools was also funded by the Bureau of Indian Affairs to build, administer and operate an Indian school on the Tejon/Sebastian Reservation and continued the school through the mid 1940’s. In accordance with the United States Constitution an Indian Reservation can only be Established or Terminated by an Act of Congress. For Example: Kern County can approve medical marijuana for growth on private property but the County cannot approve it to be grown on Federal Lands due to the fact that States and Counties have limited powers. The same is true for Federal Lands held in Trust such as is the case of the Tejon/Sebastian Indian Reservation. The Applicants for the Tejon Mountain Village Development need to present at the hearing on October 5, 2009, the Congressional Act terminating the Tejon/Sebastian Indian Reservation; the Kawaiisu Tribe is not aware of that Congressional Act ever taking place.

In Article I, the United States Constitution clearly provides that Congress was granted the exclusive right and power over Indian Tribes. The following are several authorities of law that show how the Kawaiisu Tribe of Tejon has had and still has Title to the Tejon/Sebastian Reservation.

First, in 1775, Pedro Fages came through Kawaiisu Lands and relayed his findings to Father Francisco Graces and Father Pedro Font who traveled through Mojave toward and into the southern San Joaquin Valley in 1776. In these travels they noted in their maps and diaries the different Kawaiisu Indian Villages. The Maps they produced represent under Spanish Law, a Diseno (Spanish Land Grant), or Indian Title to the land. This Land Title was also acknowledged by Mexico under the Treaty of Cordova, August 24, 1821.

Second, The conditions of the Guadalupe Hidalgo Treaty between the United States of America and the United Mexican States in 1848 acknowledged and extended the original 20 million acre Spanish Title to the Kawaiisu. Just like in Spanish Law when a Mexican Rancho was issued the previous rights to Native Americans occupation was guaranteed.

Third, On June 10, 1851 at Camp Persifer Smith the Kawaiisu awarded a Treaty to the United States Government for the purpose of peace and respect. In this treaty we ceded our 20 million acre Spanish Land Grant in exchange for 1.2 million acres.

Fourth, in September 1853 it was reduced by Congressional Act to 75 thousand acres and called the Tejon/Sebastian Reservation; it was surveyed and funded for that purpose and became the first California Reservation held in trust by the United States Congress.

Fifth, On March 3, 1855, Congress passed another Indian bill that reduced each California Reservation to only 25 thousand acres. Tejon/Sebastian Reservation was funded again but it was not re-surveyed to reflect the reduced size, even though that order was made on November 25, 1856.

Sixth, when Judge Pacificus Ord ratified in 1858 the Rancho El Tejon claim of the original 1843 grantee Jose Aguirre, who by that time was already acting for Beale, the legal brief for the case stated, “The grantor shall not disturb the Tejon Indians in the cultivation of the land and the employment of the other privileges that they are used to.
This condition of the favor of the Indians extends to the whole land granted, and gives them the exclusive right of habitation, cultivation, grazing, hunting anywhere within its boundaries.” Judge Pacificus Ord was the presiding Judge for the Lands Commission ordered by Congress to settle Spanish and Mexican Land Grants following the Guadalupe Hidalgo Treaty of July 4, 1848. By this order Judge Ord fully acknowledges that the Kawaiisu had met the requirements of the 1850’s Commission authorized by the California Land Act of 1851.

Seventh, the official United States publication of the “Eighteenth Annual Report of the Bureau of American Ethnology to the Secretary of the Smithsonian Institution, 1896-97.” Is one of many primary documents acknowledging the ownership of Tejon/Sebastian Reservation by the Kawaiisu People as Lineal Descendants and as having Inherent Legal Rights.

Eighth, the 1924 U. S. Supreme Court case under which the Tejon Ranch claims title only addresses the California Land Act of 1851. But the Congressional Act that created the Tejon/Sebastian Reservation is never addressed. Essentially the 1924 case was talking about a Rancho Property but not the Reservation Property. We have to assume that the U.S. Supreme Court was not fully informed that Judge Ord for the Commission had ruled that the Kawaiisu have met the Commission’s requirements. The United States Supreme Court did not make a ruling on the Tejon/Sebastian Reservation because it was not their jurisdiction.

Ninth, under United States Federal codes and California Public Laws one cannot gain title to land through an act or acts of duress. This is and has been the means that the Tejon Ranch has practiced and is practicing in order to prove their ownership of the Tejon/Sebastian Reservation. Over 40,000 Kawaiisu People have been killed through the years at the hands of the different Tejon holders, all in the name of ownership. To this day if a Kawaiisu person tries to enter our Reservation we are met with armed guards and told to leave. We can’t even visit our family graves or collect medicines and food.

Tenth, Federal Lands cannot be sold, transferred, or removed from Federal status without a specific Congressional Act that makes provisions for it to be done. Indian lands are protected in this way in order to stop things like what the Tejon Ranch is attempting to do. In fact, there are specific Acts stating that the Federal government is the only entity that can buy Indian Lands. So even if the Kawaiisu Tribe of Tejon wanted to sell the Tejon/Sebastian Reservation to the Tejon Mountain Village Developers there is no legal means to accomplish it.

In addition, The Tejon Mountain Village Developers did not give legal notice as required under NAGPRA and CEQA. Without adequate time to present a viable response I hereby reserve the right to extend and revise my remarks through verbal or written standards to the Kern County Board of Supervisors. I also request an unimpaired physical visit to the proposed impacted areas to be developed as required by law.

This is part of the September 25, 2009 online edition of The Mountain Enterprise. 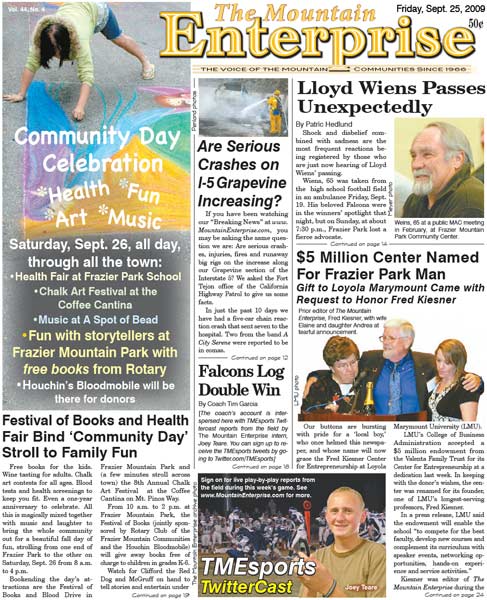