By Patric Hedlund, Editor
Taking three days last week to dig over 3,195 cubic feet of snow, 30 inches deep, to liberate my car from becoming a character in a Frozen movie, gave me a rare opportunity to think about the New Year…and the events of the decade we are leaving behind.
[This story was originally published January 3, 2020]
The day after Christmas I woke to find a giant polar bear crouched in front of the door where my car had once been parked.
My calculations show that 30 inches (2.5 feet) of wet snow on top of a 7-foot-wide, 15-foot-long vehicle, equals a 262.5 cubic foot  mound. So, if this type of heavy snow that fell on Christmas night and throughout the next day can weigh about 21 pounds per cubic foot, that could be 5,512 pounds (about 2.76 tons) of snow to be removed—just to see how crushed my Subaru had become, and to learn whether all the tires were flat.
That was Day One.
They weren’t.
On Day Two, I was able to clear 72 feet of driveway, learning brilliant new things about the impact of repetitive motion labor on the human body, and discovering the genius of thick, well-padded snow gloves. Let’s also mention the benefit of taking frequent rests…and keeping a sense of humor.
But it took Day Three, December 29, to punch through still another 35-foot expanse of snow berm to open a passageway to the street  below, a passage large enough to liberate my Crosstrek, equipped with Spikes Spider chains.
It leapt free, a car again. I did it all myself, with my trusty plastic and wood snow shovel from Ace Hardware, even while never believing it was possible I could have accomplished that.

This is part of the January 31, 2020 online edition of The Mountain Enterprise. 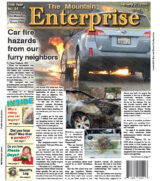 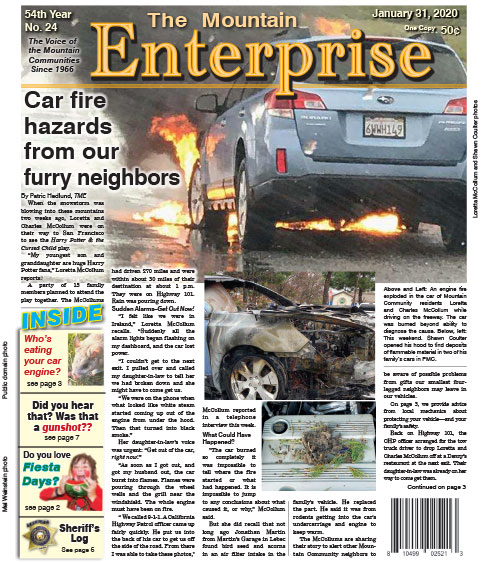