It is a glass half-full, glass half-empty proposition for headline-writers on both sides of the dispute. Whether 12,000 acres of native grasslands with major windstorms is a suitable site for 19,333 homes, several industrial parks and commercial areas that would draw an estimated 57,000 people to live 45 miles north of Castaic is still being litigated.

Tejon Ranch’s spokesperson spins the court’s ruling as “denying 20 of the 23 claims raised” by the litigants. But the three issues that the judge found to be of concern gave the CBD and CNPS hope that the ruling “sends a clear signal that elected officials across the state must consider the serious risks of building on wildfire-prone land.”

The environmentalists’ spin claims that “the science is clear that developments like Centennial will literally be built to burn,” said J.P. Rose, an attorney for CBD, “and our elected officials can’t continue to downplay these risks through inaccurate environmental reviews. This is a wake-up call for policymakers across California.”

Gregory S. Bielli, President and CEO of Tejon Ranch Company disagrees:  “Environmental impact reports are extremely lengthy, complex documents, and it’s difficult to get everything perfect the first time out.” He  minimizes the problem the ruling presents to Tejon Ranch’s master plan, saying the court found that “certain narrow aspects of the EIR related to the analysis and mitigation of greenhouse gasses and off-site fire risk needed further analysis or clarification.”

But the Los Angeles Superior Court judge rejected the developer’s assertion that  “wildfire risk impacts outside of the project will be reduced to less than significant.” Judge Beckloff said that statement is not supported by analysis. CBD said the project “puts more people in harm’s way and contributes to dramatic increases in fire suppression costs.”

Nick Jensen of the California Native Plant Society said, “ongoing sprawl into the wildland urban interface is not only bad for nature, but for people too.”

Major upgrades to State Route 138 (an east-west link between Interstate 5 and SR 14) will be needed.  SR 138 will be a primary roadway to serve Centennial, with an estimated 75,000 new trips a day. CBD explained that “Centennial would also require construction of an $830 million, taxpayer-subsidized six-lane freeway. The new freeway and development would block the movement of mountain lions, which are already struggling to maintain genetic diversity because they are hemmed in by existing highways and development.”

Tejon’s Gregory Bielli said his company and L.A. County will work “with the judge’s direction…to address the few remaining issues, just as we did in Kern County when a court ruled the EIR needed additional analysis. The analysis was completed, Grapevine was reapproved, and the court affirmed the additional analysis was correct. We expect the same will be true for Centennial.”

The company has sophisticated and well-financed lobbying and political operations to make sure their expectations are fulfilled.

The Center for Biological Diversity reminds its readers that Tejon Ranch has shown bad faith toward environmental preservation commitments once it has received government approvals for building plans. Currently, though the company has secured “entitlements” from Kern County to build Grapevine (12,000 homes at the northern base of the Grapevine pass, adjacent to Tejon Commerce Center) and Tejon Mountain Village (3,450 luxury homes adjacent to resort hotels on ranchland near Lebec), the company is in litigation with its own ally, the Tejon Ranch Conservancy. The developer allegedly stopped making agreed-upon payments to the conservancy to care for land that has been set aside under mitigation promises to t hegovernments that approved those developments.

This is part of the April 2, 2021 online edition of The Mountain Enterprise. 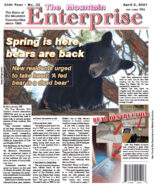 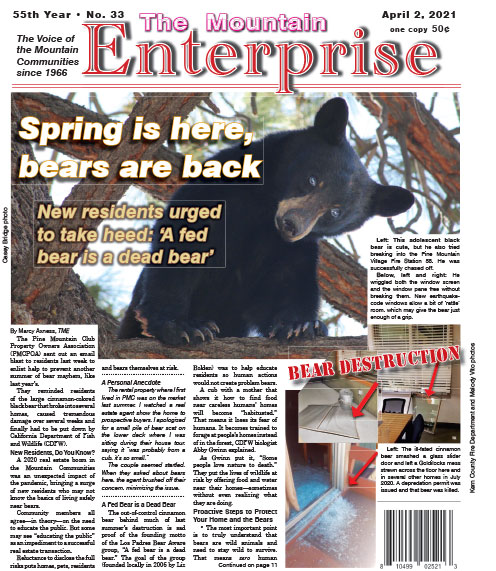