Kern County Supervisor Ray Watson is a fan of high speed rail. For over seven years, his single solution to Mountain Community concerns about the cumulative impact of development on the growing traffic congestion and air pollution along the Interstate 5 Grapevine corridor has been those three magic words: “high speed rail.” Last Thursday that notion became suddenly less abstract.

The California High-Speed Rail Authority voted to fund a study to take another look at routing the high speed rail “bullet train” across the Grapevine. The board said the I-5 corridor may be an alternative to passing through the Antelope Valley.

The Antelope Valley Route, with a station in Palmdale, has long been the cornerstone of plans laid by Los Angeles County Supervisor Michael Antonovich, whose district extends north to Gorman and east through the Antelope Valley. He has said that the Antelope Valley’s LA/ Palmdale Regional Airport would grow in importance with a bullet train connection.

Antonovich is reported to be objecting strenuously to looking seriously into an alternate Grapevine plan. He isn’t alone.

“They have invested millions of dollars to come up with a plan for developing their land, based on the idea that the train was going around the other way, to the east,” to connect to Bakersfield and Fresno.

But the High-Speed Rail Authority Board said Thursday that an alternate route across the Grapevine could save $1 billion in building expenses for the line—and cut nine minutes off the train’s timetable.

Some L.A. County analysts note that there has been a 24 percent increase in housing and other developments along the proposed Antelope Valley corridor since it was first considered. That change creates a new level of difficulty and expense for securing rights of way. The complexity of tunneling through the Tehachapi Mountains and newly revealed seismic challenges have also been mentioned as reasons to consider the feasibility of an alternate route.

Watson said he hasn’t had a recent conversation with Supervisor Antonovich on this (or other issues) in quite a long time.

What is the overall likelihood that funding will be sufficient to build the project? Watson said he’s thought about that. “Everything I’ve been told is that the funding already appropriated, cannot be “unappropriated.”

There are two sources, he explained: “The first is the Federal Transportation Authority funding. The second is $9 billion in bond money from voters in California, so we have a good pot of money to get started with.”

But the real question, Watson says, is, ‘Could we get continuing funding?’

“The Republican leadership feels this is not the right time to incur expenditures that could be delayed or postponed. Rep. Kevin McCarthy, for instance, feels pressure to cut back. But the money is there and cannot be unappropriated. That [money] could build the system from Fresno to Bakersfield,” Watson said confidently.

The downsides of building across the Grapevine, in addition to the well-known San Andreas Fault seismic issues, is the steep grade at the northern end of the Grapevine. It causes dozens of big rig trucks each year to lose their brakes or for brakes to burst into flames. There were five fires along the Grapevine in the past two weeks, suspected to be related to big rig sparks. Hazmat spills are becoming routine. So how would a high speed train navigate this challenge?

“I’ve been told they would have to begin building an elevated track way out into the San Joaquin Valley, [toward Highway 99] to be able to compensate for that grade,” the former chair of the high speed rail coalition said.

And what about the question being lobbed around on internet chatboards about whether there is any chance that a station could be built to service this area, allowing destination tourists to stop off?

One blogger has asserted that a station at I-5 and Highway 138 could serve Santa Clarita, the Mountain Communities and provide access to the Palmdale Airport.

“No there would not be any stop in your area,” Watson said without a second thought.

The high speed rail plan is targeted to be able to transport passengers from Los Angeles/Anaheim to San Francisco in 2 hours and 40 minutes by 2020, according to plans.

Though there may be some slower trains with regional stations, “They won’t be putting a stop in any population centers less than 250,000 people. I think any stop would more likely be in the Santa Clarita area. There would be no stops between there and Bakersfield. That is one of the reasons I feel it would be a mistake to go over the Grapevine,” Watson said.

This is part of the May 13, 2011 online edition of The Mountain Enterprise. 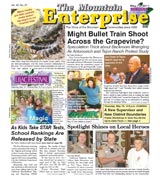 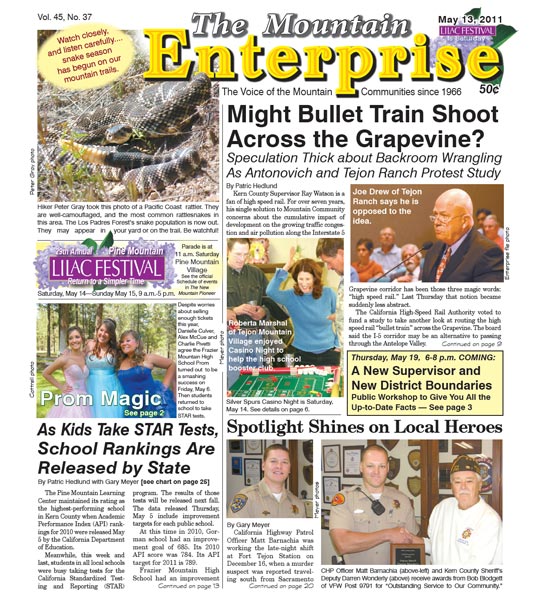