Jim Schaaf of Reno, NV was traveling with his wife to visit family in Westlake Village. He had pulled off Interstate 5 to fuel up at Flying J when a truck driver honked and pointed. He looked in his rearview mirror and saw smoke pouring out from his Tradwinds motorhome.

Schaaf made the right decision not to pull all the way into Flying J next to the fuel pumps. He stopped the vehicle just 50 feet after pulling in from Frazier Mountain Park Road.

Flying J manager Chris Hert came out and tried to help with a fire extinguisher, but the flames spread too quickly.

Ammunition was exploding inside as the crews put down the blaze. Schaaf was able to unhitch his Suzuki Grand Vitara SUV from the back of the motorhome and keep it from being damaged.

This is part of the March 20, 2015 online edition of The Mountain Enterprise. 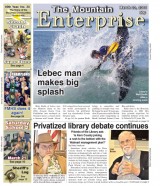