A 16-year-old boy and his friend limped into the coffee shop adjacent to the Screaming Squirrel restaurant in Pine Mountain Village on Sunday, May 17 at about 4:30 p.m. They were seeking assistance for what observers thought could be a concussion, abrasions and a broken rib.

“His eyes were rolling back into his head and he was clutching his chest,” said the coffee shop waitress, Sarah Goldberg. She told owner Carl Smith, “… he needs medical attention, right now.”

The 911 dispatcher sent a Kern County Fire Department (KCFD) paramedic. Slightly earlier, another youth with scratches and a possible broken wrist told family friends in Lake of the Woods that he had been attacked by a mountain lion.

The first youth was taken to Henry Mayo Hospital, also uttering a tale about a mountain lion attack.

A weekend spokesperson for the fire department relayed that report in a telephone call with the Bakersfield Californian, without a written report. It was also broadcast by Channel 17 KGET-TV news, inflaming concern throughout this region that there was a dangerous lion on the loose—but that report was untrue.

Sheriff’s deputies who questioned the first boy’s friend about what had caused the injuries heard a very different tale. It was an exotic mix of three teenagers on the prowl for marijuana and a decision to break into the home of an adult mentor who they thought would be at Lilac Festival. Their plan didn’t go smoothly.

On Monday, KCFD Public Information Officer Sean Collins issued a news release referring to the first youth: “New information has surfaced that would indicate the victim did not receive his injuries from a mountain lion attack, but from an alleged altercation with a local resident.’’

Cutting through the rumors

That local resident is Alex Fields, the president of the Frazier Mountain High School Booster Club, a soccer coach and the father of two children.

He returned calls from The Mountain Enterprise on Wednesday, May 20 to explain what had happened from his point of view.

Attempts by this newspaper to reach the three youths involved are ongoing. Investigation into the matter by Kern County Sheriff’s deputies is also continuing and there may be legal action taken.

So, because they are juveniles 15 and 16 years old, for the sake of this report we will refer to the youths only as S. (the boy who went to the hospital), E. (the boy who spoke with the deputy) and B. (the boy who got back to Lake of the Woods and widely spread the mountain lion story).

Goldberg, the waitress at the coffee shop, said the rumor about the mountain lion attack was “everywhere” at Lilac Festival on Sunday afternoon. But she heard some of what was being discussed by E. and the deputy after S. had been taken to the hospital.

Sgt. Mark Brown of the Frazier Park Substation explains it like this: “The boy said he and two other juveniles went to a house to steal marijuana [from someone with a medical marijuana prescription]. The boy said the homeowner came home so the boys jumped off an elevated back porch and ran into the woods…. While the deputy was at the scene, the U.S. Forest Service and the Department of Fish and Game were dispatched to investigate the report of a teenager being attacked by a mountain lion nearby. The deputy was unable to confirm if that incident was related. Nobody at the scene reported a burglary or any other crime during this incident. The 16-year-old boy was booked into Juvenile Hall for being under the influence of a hallucinogenic drug.”

In an interview, Brown related that the youth said, “I think I smoked some mushrooms,” and “displayed symptoms of being under the influence….”

After the discussion with E., deputies began to conclude that the story about the mountain lion was an attempt to cover up what had actually happened.

The U.S. Forest Service and the Department of Fish and Game drew the same conclusions and did not investigate further.

Goldberg summarizes the situation as “ridiculous insanity… with jumping off balconies and breaking ribs and being attacked by mountain lions….”

Fields doesn’t find the situation amusing. He and his daughter, a graduating high school senior who has simultaneously finished her certification in cosmetology, had stopped by their home to drop off a tired puppy mid-afternoon Sunday.

As Kelcie Fields started to enter the door, someone crashed into her, desperately trying to exit through the same door. Fields said she screamed, “Dad! There’s people in the house!”

Fields said he saw two boys, who he recognized, climbing down the lower section of the back deck and running down the cliff into the ravine below. A third person, “six foot one and 190 pounds, taller and heavier than me,” charged toward his daughter. “I grabbed him and smashed him into the dining room table,” Fields said. “It was a shock. I did think my kid was in danger. The only thing I can think to do is to absolutely disable anyone who is a threat. These are my babies. I made a commitment to my wife as she was dying that I would raise these kids and be sure they are alright. [Their mother died of cancer eight years ago.] It was a shocking thing. It was shocking and awful. There is no macho part of me right now that says ‘that kid got what he deserves,’ I was protecting my daughter. I’m sure he may have a black eye today.”

Fields says the intruder had his son’s iPod in his hands and jewelry falling out of his pocket. “My daughter saw that the money she had earned for her first week’s work as a cosmetologist was gone, and after ‘persuading’ him, he gave it back to her.

“I did what I had to do to get my property back and to protect my daughter. I told him, ‘You are in my home with my daughter and you are lucky it was me that came into this house and encountered you.’ I think what I did was every bit as effective as calling the sheriff. There is no damage to my house, there was no forcible entry."

“My eleven-year-old son probably left the door unlocked. There was nothing for me to report. It is handled. No one left here with any of my possessions. There was nothing here that they were looking for in the way of drugs, except they drank my son’s cough syrup. How pathetic is that?”

Fields says he told E. “to go get S. and bring him back here to talk with me.” Fields said he was angry and hurt that they would have done what they did. He said he called the youth’s mother and talked with her about getting him into a program to get help.

Fields said that as of Wednesday morning he had not yet been contacted by any law enforcement officer and that no card had been left at his house. “No one has called my house from the sheriff’s office,” he said.

This is part of the May 22, 2009 online edition of The Mountain Enterprise. 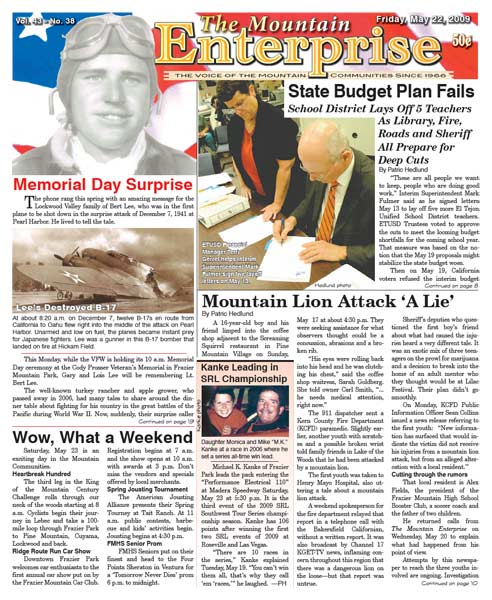