Residents of the Frazier Park -Pine Mountain Club area, who regularly use Cerro Noroeste for recreation, will soon petition the Planning Department and the Board of Supervisors to return the name “Cerro Noroeste Road” to the eight-mile segment of 9FR25 that runs from Mil Potrero Road (Apache Saddle) to the top of the mountain. At that time we will submit a protest petition signed by 340 residents when they learned that the road leading to their beloved mountain had suddenly, with no warning, morphed into Hudson Ranch Road.

In advance of filing the petition, we write now to request that you waive the $815 filing fee. We ask this on grounds so solid that they cannot possibly become a “slippery slope” for future petitioners.

The justification for the fee waiver is the fact that no notice of the proposed name change was given to residents of Frazier Park, Lake of the Woods, Pinon Pines, Cuddy Valley and Pine Mountain Club although they are the main users of the eight-mile road from Apache Saddle to the summit of Cerro Noroeste (9FR25). They use it for hiking, picnicking, exercising, and taking their children to school at the Pine Mountain Learning Center, whose students and teachers all live east of this road. Please note that the nearest communities to 9FR25 are Pine Mountain Club approximately 2.1 miles, Cuddy Valley 7 miles, and Frazier Park 17 miles to the east; while the nearest communities to the west are Maricopa 32 miles, and Taft 39 miles. Your notice in the Taft Midway Driller was clearly aimed at those distant communities to the west; however, as has been established for years, the paper of record for the Frazier Park-Pine Mountain Club area is the Frazier Park based Mountain Enterprise. Although it is possible that some few exist, we have met no hiker, picnicker, runner, bicyclist, teacher, or school parent who knew about the name change in advance.

If residents of our mountain communities had known about the proposed change, we are confident that we could have persuaded the planning department and the board of supervisors to retain the name of this eight-mile segment of 9FR25, even if they supported the Sneddon’s request to change the rest of Cerro Noroeste Road (Forest Highway 95). Had we had the opportunity, this is what we would have argued:

First, we would have argued that we have as much standing in this case as anyone, since as taxpayers to the federal government we are the ultimate owners of forest service land. As residents of this area, we have particular standing in this section of the Los Padres National Forest.

Third, we would easily have made the case that you should consider the branch of Cerro Noroeste Road that leads from Apache Saddle to the top of Cerro Noroeste (9FR25) differently from the main stretch of the road, which is a continuation of Mil Potrero Highway (Forest Highway 95). 9FR25 is a separate road according to the USFS, and there should be no problem giving it a separate name to reflect its location.

Fourth, we would have argued that to reject a Spanish name because some people find it difficult to pronounce or spell is frivolous. Does anyone think that Anglo Americans are truly that limited? Los Angelenos have no problem finding Figueroa Street or La Cienega Blvd., whether or not they can spell them. Should Santa Claritans change the name of Bouquet Canyon because proper spelling (or pronouncing) requires a minimal knowledge of French? Both Cerro Noroeste and Bouquet Canyon commemorate early Spanish and French immigrants. Let us remember this history through preservation of the heritage names.

Fifth, we would have argued that residents of the Mountain Communities feel no affinity to former Supervisor Stanley Abel, whose book banning and KKK membership tarnishes whatever he accomplished as a road builder. We resent the 1990s attempt to reinstate his name on Cerro Noroeste mountain, and now are concerned about the recent road name change which erodes the presence of the historical Cerro Noroeste name. Leaving the upper portion of the road (above Mil Potrero Highway) as Cerro Noroeste Road will help to solidify the name in people’s minds.

We will be making these arguments when we file to return the name of 9FR25 to Cerro Noroeste Road. In the interest of fairness and to redress the wrong done to us by failure to notify, we respectfully ask that you make our task easier by waiving the $815 fee.
Thank you for your time and attention.

This is part of the August 23, 2013 online edition of The Mountain Enterprise. 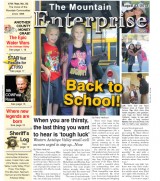 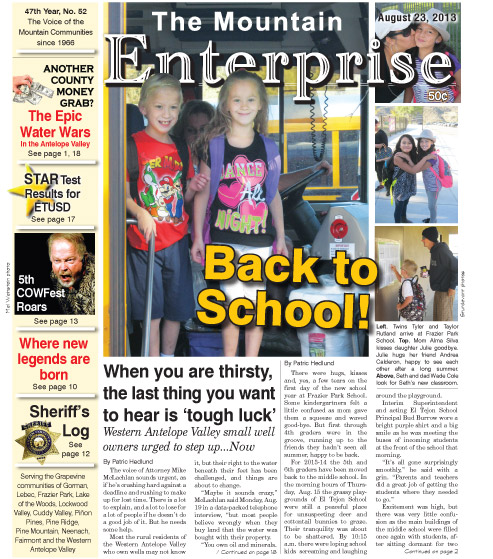