Download the complete report (Parts 1 and 2) as a PDF file.

Last week, April 10, 2009, we published a report explaining to our readers that after 100 hours of examination, we were disappointed to report that there are such serious errors and internal contradictions in the way two of the most important documents for the future of this region have been presented by the developer and the U.S. government, that it calls into question the legality of the public comment period itself.

We asked if the clock should stop ticking and the documents be withdrawn for correction before they should be considered valid for the purpose of public comment.

We placed the reports and sample discrepancies online so Tejon Ranch and the U.S. Fish and Wildlife Service could review them clearly and reply. These are the replies we received.

“Public participation is important. We encourage anyone with an interest to read the draft conservation plan and DEIS and provide us with their comments.

“After the comment period closes, we will address all specific comments on the documents in preparation of our decision on whether or not to issue the permit.”

We appreciate The Mountain Enterprise participating in the first of several public comment periods as part of the U.S. Fish and Wildlife Service’s (FWS) extensive review of the proposed Tehachapi Uplands Multi-Species Habitat Conservation Plan. Working closely with the FWS, we drafted this Habitat Conservation Plan (HCP) to provide a comprehensive set of protective conservation measures for 27 different plant and animal species—including the California Condor. Many of the lesser-known species covered by the plan have no state or federal protection at all. HCPs are authorized by Congress under the Endangered Species Act. This HCP will provide an unprecedented level of protection for species and their habitats while Tejon Ranch carries out its vision of extensive conservation, continued ranching and farming, and the highquality environmentally sensitive development of a small portion of its land. If approved, it will join nearly 800 HCPs nationwide currently protecting nearly 600 different species and millions of acres of habitat.

We respectfully disagree with The Mountain Enterprise’s contention that there are “major flaws” with the documents. The documents are comprehensive, perhaps complex to some, and describe in great detail both the efforts of Tejon Ranch to protect and conserve natural resources within the 142,000 acres covered by the plan—and the FWS’s evaluation of the HCP’s effectiveness. We encourage people to participate in the public comment period and point out any issues or questions they may have to the FWS. Once this public comment period ends on May 5th, the FWS will respond to all the comments received and will subsequently publish a revised version of the documents and the public will again have the opportunity to comment on them prior to any final decision.

The Mountain Enterprise also thought it important to question the credentials of Mr. Pete Bloom, the primary author of the Condor Plan, erroneously saying he’s not a condor specialist. In fact, Mr. Bloom is a highly-regarded condor expert who worked on the Condor Recovery Program for many years and, in cooperation with the FWS, personally trapped and tagged all of the original wild free-flying California Condors prior to the captive breeding program. Working with the National Audubon Society, he conducted extensive ethological field observations, including on Tejon Ranch, for the California condor recovery program. Mr. Bloom’s plan was then reviewed and supplemented by two additional condor experts: Dr. Robert Risebrough, a current member of the California Condor Recovery Team and an acknowledged expert on mortality and diseases of condors; and Mr. Lloyd Kiff, who, as past Chairman of the California Condor Recovery Team, wrote the California Condor Recovery Plan in 1996. With the assistance of scores of experts in their field, including the FWS, Tejon Ranch has developed a plan that will effectively integrate its land use plans with a comprehensive series of measures to protect and conserve species and their habitats.

It is not the length of the documents that is of concern, it is their sloppiness.

Contradictions between maps and text, maps and maps, text and text and DEIS to HCP are of such frequency and severity that they create a barricade of errors between the reader and meaningful consideration of the important science that should be the focus of such work.

It is a fiction to claim our report was about “complexity.” It is about self-contradiction within the documents themselves which create material obstruction to public comment. The result, we report with disappointment, creates a parody of what both writers here call “the public comment period.”

Our goal in publishing this sampling of notes is to bring to the attention of all parties—the public, the United States Fish and Wildlife Service, our state, local and national government representatives and the developer—to this question:

When the agencies involved have released significantly flawed documents to the public with a ticking clock within which the documents are to be examined and commented upon, what does the notion of "public comment" and a "public comment period" really mean?

There is a legal reason to make this careful distinction. Under the procedural rules, it appears that principals are not required to answer questions during the comment period regarding "public comments." On the other hand, it is clear that both FWS and Tejon Ranch Company are proud of their work product and its comprehensive nature. We anticipate they will be motivated to help us report about the content so the importance of these issues and options can be more widely understood by the public.

See a preliminary sample of the kind of discrepancies and inconsistencies that are of concern at www.MountainEnterprise.com including contradictory map images.

Go to www.fws.gov/ventura or write the Ventura Fish and Wildlife Office to see the documents.

Comment on the proposals and draft EIS by email at fw8tumshcp@fws.gov or to Mary Grim, [USFWS Pacific-Southwest Regional Office, 2800 Cottage Way, Rm. W-2606, Sacramento, CA 95825], or to Steve Kirkland at the Ventura Fish and Wildlife Office [2493 Portola Road, Suite B, Ventura, Calif. 93003]. 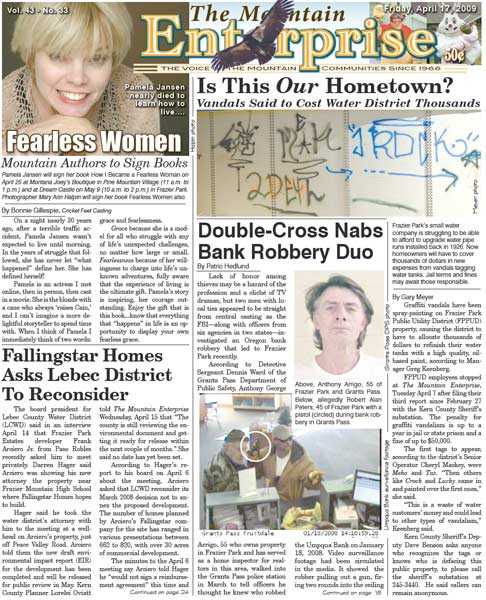