UPDATE:  Saturday, Nov. 7, 2020 at 4:35 p.m. —The Associated Press (AP) has announced there are now 290 electoral votes for the 46th United States President-Elect Joseph R. Biden and Vice President-Elect Kamala Harris. The AP called both Pennsylvania and Nevada for Biden-Harris on Saturday, Nov. 7. The threshold for winning the presidential election is 270 electoral college votes. Numerous states are still counting the historic number of votes cast in this election. Official certification of voting results across the country will occur in the coming weeks.

The 45th U.S. President Donald J. Trump has tweeted today that he won the election. He has promised to pursue legal challenges to dispute the results. He currently has won 214 electoral college votes according to AP.

UPDATE:  Saturday, Nov. 7, 2020 at 8:35 a.m. — At 11:25 a.m. EST (8:25 a.m. PST) the Associated Press (AP) called the vote in Pennsylvania for former Vice President Joseph R. Biden. That means he has reached and exceeded the 270 electoral votes required to  be designated the winner of the election for President of the United States. AP also called Nevada for Biden and Harris. Arizona, Wisconsin and Michigan were called earlier for Biden-and Vice President-Elect Kamala Harris. All these states that put Biden over the top in 2020 to become the 46th American president were states that helped elect Donald Trump in 2016. Below is our story about November 3, election day 2020, in this Mountain Community

Voters began taking their places in line early on Tuesday morning, Nov. 3 at polling places across the Mountain Communities. As doors opened at 7 a.m. from Lebec to Frazier Park to Pine Mountain Club, an historic 110 million Americans across the United States had already cast their ballots.

By early November 4, President Donald Trump announced that to count those votes would be “a fraud on the American public.” That is false. The laws in 50 states require each vote to be counted.

Voting here appeared to go smoothly, whether mailed, dropped into the county’s early drop-box events at Frazier Park Library (which gathered over 200 votes), or in-person at polling…(please see below to view full stories and photographs)

Left: Voters streamed in steadily to the Frazier Park Library polling place on Tuesday morning, as they did at other polls throughout the mountain.

Above: Boo Gard (left) checked every absentee ballot for the voter’s address and signature before voters popped their envelopes into the ballot drop box. A sense of enthusiasm for participating in this great American ritual surrounded the Pine Mountain Community Christian Church polling place Tuesday.

The e-Edition is available now with full photos and stories at The Mountain Enterprise e-Edition. Select the 2020-1106 edition.

This is part of the November 6, 2020 online edition of The Mountain Enterprise. 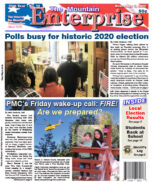 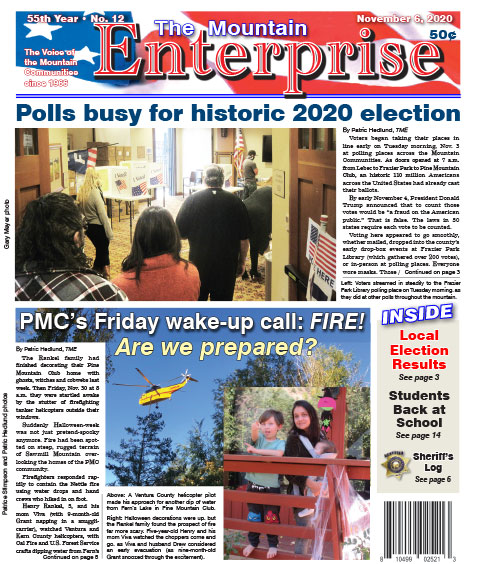