“It was an unexpected opportunity for me,” Dena Kiouses said, “and I took it.”

Her resignation means that every public school in the Mountain Communities will have a new principal when school resumes this year, except the Pine Mountain Learning Center, a charter school, which is supervised by a council of parents with Assistant Administrator Mary Griffin. Superintendent Katie Kleier is the honorary principal of the charter. The El Tejon Continuation High School, which typically serves about 12 students, has a part time principal, who has been Buck Weber.

Kiouses explained in an interview on Tuesday, July 12 that Vineland School (15 miles north of the Laval Road exit in Lebec) asked her to serve as principal there.

It is a kindergarten through 4th grade school in the Vineland School District, with 420 students, she said. This job will allow her time to seek her doctorate degree from Cal State Fresno. Kiouses says her tentative doctoral thesis topic is, “Does Tracking Prevent Access to Educational Opportunities for Students?”

Kiouses, who moved with her husband Steve to Lebec when she took the job as principal of two schools with ETUSD, says she will maintain her place on the Mountain Communities Boys & Girls Club Board and will continue to participate with McCASA (the Mountain Communities Coalition Against Substance Abuse) and volunteer for Fiesta Days.

“We bought our house here and the new job is just 25 miles from Lebec,” Kiouses said.

Focusing on a single school rather than two is one of the attractions of the new job, she agreed. “I have no hard feelings for the district. My husband Steve was really sad. I had no plans to leave, but it is important that I have time for my family too.”

Kiouses said that being present for two PTSOs and two site councils for two different schools “and all that goes with it,” plus the frequent commute to the Kern County Superintendent of Schools office in Bakersfield was strenuous.

“I know that some in the community say we have too many administrators, but as principals we have no one to handle tasks for which other districts have directors, such as ELD (English Language Development), testing and special education. Sometimes I could be overwhelmed. It is important to me to be an educational leader. I don’t think I could keep up the necessary level of participation for that much longer. This is not a complaint. I did it for three years.”

Last year, about mid-year, Charles “Buck” Weber came to El Tejon School to assist. “It helped a great deal to have someone come over as a vice principal,” Kiouses added.

El Tejon School has completed its fifth year as a “program improvement” school, because it has not met the test score increases mandated under the federal No Child Left Behind law. The consequences for that can be major. Currently there is an alternative governance board which is making proposals for improving academic performance at El Tejon. Superintendent Katie Kleier said in an interview July 5 that moving fourth and fifth grade this year back to Frazier Park School, and moving seventh and eighth grade next year to Frazier Mountain High School may also qualify as “restructuring,” which is another option under NCLB for improving academic scores.

This is part of the July 15, 2011 online edition of The Mountain Enterprise. 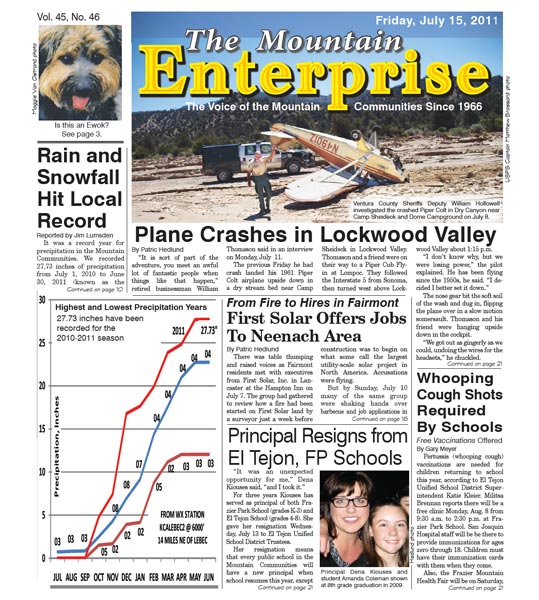