Comments Due by May 3

The endangered California condor is making a dramatic comeback in the wild. Part of its historic critical habitat is on Tejon Ranch Company (TRC) land that developers want to use for Tejon Mountain Village. Last week the U.S. Fish and Wildlife Service (FWS) opened a 90-day public comment period for a revised plan to manage habitat for the protection of the largest land bird in North America and 26 other endangered or threatened species of animals and plants in that same habitat. Public comment is invited until May 3.

The FWS has used the new data and other changes in the zoning status of the ranch to compile the revised Tehachapi Uplands MultiSpecies Habistat Conservation Plan (TUMSHCP). It is released with a FWS’ Supplemental Draft Environmental Impact Statement (SDEIS) of its own in response to public comments to the 2009 documents.

Ileene Anderson, biologist for the Center for Biologial Diversity said, “Our comments were extensive. We said the FWS had overlooked many issues in regard to species and development. They had areas set aside for conservation that were some of the same areas that the fire abatement plan required to be cleared—so habitat would obviously be destroyed there.

Tejon Mountain Village is being built in the condor’s critical habitat.

In addition, massive wind farm development allowed by Kern County since that 2009 document will have great impact on California condors and the Golden eagle. The condors are making such a comeback, but now extensive windfarms within their habitat, the way the projects are laid out on the landscape and Tejon’s development plans may create a barrier.”

Root said no change has been made to the development footprint of Tejon Mountain Village.

The new documents contain a table of the changes between the 2009 plans and the 2012 revisions, plus a glossary of terms used, Root added. He emphasized that FWS is eager to receive comments from the public.

The plans are online at the Ventura Fish and Wildlife Office’s website at www.fws.gov/ ventura/. Hard copies are available for review at the Frazier Park Branch Library and The Mountain Enterprise office. To make an appointment at the newspaper, call 661-245-3794.

Email comments may be sent to fw8tumshcp@fws.gov or mailed to Roger Root at the Ventura Fish and Wildlife Office at 2493 Portola Road, Suite B, Ventura, California, 93003.

This is part of the February 10, 2012 online edition of The Mountain Enterprise. 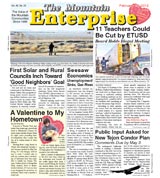 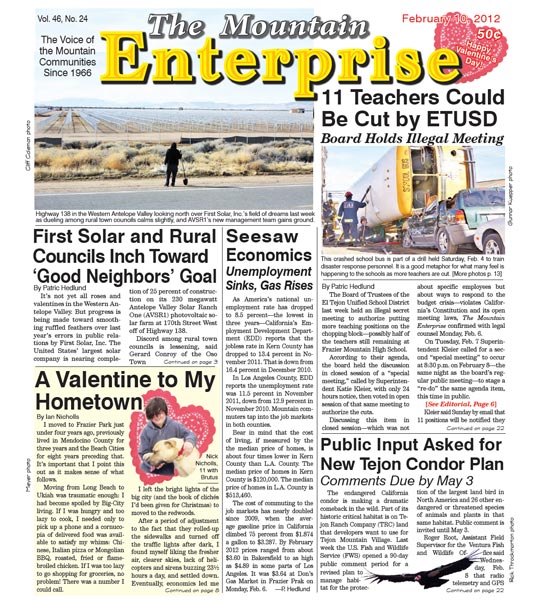