By Patric Hedlund with additional reporting by Katy Penland

Public frustration with what have been called unresponsive and secretive governing boards at the El Tejon Unified School District (ETUSD) in the past is part of the mountain’s history, reflected in the archives of The Mountain Enterprise. That pattern has been slowly changing over the last four years. Now the chair’s gavel has been passed to a trustee elected by voters as a mother who values scrutiny, dialogue and, yes, questions.

On December 9, Anita Anderson was elected by fellow trustees in a 3-2 vote to chair the board for 2010. The vote split was predictable, with John Fleming, Ken Hurst and Anderson on one side and Cathy Wallace with Paula Regan on the other. Then, in a show of unity, Regan was elected as clerk of the board (somewhat like vice chair).

Shelly Mason attended a closed session of the board earlier that evening to personally offer her request to retire as ETUSD superintendent so that she can focus on recovering her health. She has been on medical leave since May 2009 after discovery of a brain tumor.

In an emotional session, the trustees accepted her letter. Mason has worked for ETUSD for over two dozen years, rising from a teacher to principal of El Tejon School. She was named district superintendent following the abrupt departure of John Wight from the position May 31, 2006, under a cloud of misconduct allegations.

Mason took office as the state’s fiscal problems triggered an ongoing series of deep cuts to the ETUSD budget. She was confronted by a trail of errors that came to light regarding Wight’s conduct of the school bond election in November 2005.

The voters who were told the bond would rebuild 57 percent of the district’s classrooms learned a mistake in the ballot wording would result in only 17 percent being replaced. Wight’s errors—unquestioned by the 2005 board, chaired by Steve Newman who said “loyalty is the board’s priority”—raised the value of trustee questioning to a campaign issue in Anderson’s election in November 2006.

On January 30, 2009 The Mountain Enterprise reported the school bond oversight group, tasked with oversight of proper use of the $7.12 million bond fund, had never been activated, with no audit or reports for over 2.5 years.

A new bond oversight committee was just forming when Mason became ill. It has now had a meeting, and seems to be finally operational.

Kern County Assistant Superintendent of Schools Mark Fulmer said that the search for a new ETUSD superintendent can be accomplished by using an outside search firm (which will cost about $20,000) or by looking for a candidate within the district. Ken Hurst moved that the board pursue Fulmer’s second option and nominated himself and Paula Regan “be appointed as a committee to negotiate with an internal candidate.”

Mark Fulmer also introduced Gilda Puente-Peters, an architect who is reviewing the current building plans for compliance with the Americans with Disabilities Act (ADA) requirements. She said the architect’s plans show barriers in the new construction that should not be there. To avoid the expense of retrofitting to comply with ADA (as Los Angeles Unified had to), Fulmer suggested she be allocated about $20,000 to review the plan and the sites. The board was told she is a leader in helping districts with ADA.

There was a question regarding the role of the principal architect in that matter, which will be discussed further at a future meeting.

Race for the Top

Mary Hon (a Frazier Park School second grade teacher with a masters degree in reading) gave a presentation on Reading Intervention programs that was well received.

A special board meeting will be held Tuesday, Jan. 5 to apply for part of the state’s anticipated $350-$700 million in federal American Recovery and Reinvestment Act (ARRA) funding for education innovation and reform. They will decide about applying by January 14 for the grant. The public is welcome to attend the meeting that starts at 7:15 p.m. in the Frazier Mountain High School Library.

This is part of the January 01, 2010 online edition of The Mountain Enterprise. 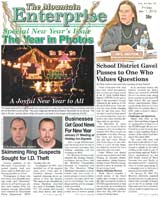 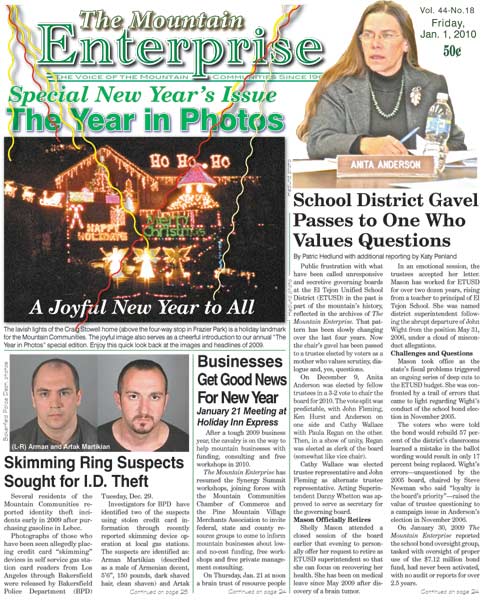