El Tejon Unified School District has just released a notice that the first meeting of the new ad hoc School Safety Committee will be held tomorrow, Wednesday, Feb. 6 at 6 p.m. at the new ETUSD board meeting site, the El Tejon Continuation School building on the Frazier Mountain High School campus. The actual notice is posted to the right side of this page, at Community FYI.

See below for the report about how the school safety committee for local schools came to be formed.

It was almost a sleep-over party for the El Tejon Unified School District trustees’ meeting last week. The new board finished up their Thursday, Jan. 24 agenda on Friday morning, Jan. 25, after midnight. But they did not adjourn without fulfilling their principle mission for the evening: creating a committee to review and implement a district-wide safety plan.

By 10 p.m. parents, support staff and teachers had signed up to participate on a committee to be chaired by Trustee Scott Robinson. The group’s mission is to review and update school safety plans to advance emergency preparedness for the district and each of its four schools.

Robinson is a Los Angeles County firefighter-paramedic. He said he will invite Kern, Ventura and L.A. County Law Enforcement, California Highway Patrol, L.A. County School Police and Kern County Firefighters to participate on the committee. He said there should be monthly drills to acquaint teachers, staff and students with emergency response procedures.

ETUSD won a $20,000 grant to create a district-wide safety plan in 2005. The grant was written by Anne Weber (of the Mountain Communities Family Resource Center) and a former ETUSD transportation director, but then-superintendent John Wight did not follow through to create the plan before his hasty resignation in May 2006. Superintendent Shelly Mason hired former trustee Steve Newman to complete a plan and to help implement a radio communication system for all ETUSD sites.

That preparedness plan was finally delivered in 2007.

This was the first large-scale practice of the earthquake scenario in the state. A reported 5.5 million people in Southern California participated.

It was also the first ‘shake out’ of ETUSD’s new emergency preparedness procedures and radio communication system at all school sites.

It was a good start, but Superintendent Mason fell ill and district-wide safety drills were not sustained.

PMLC continued participating in the Great ShakeOut drills each year, but other sites have been erratic.

School shooting events in Newtown, Connecticut and even recently in Taft High School have signalled a new era of concerns related to gun violence.

At the January 24 meeting, parent William Edwards stood to say he is a Los Angeles County Sheriff’s Department trainer for ‘active shooter’ response protocols and an information liaison for FBI terrorism alerts. He said he has a 6-year-old student in the district and will lend his expertise to the new group.

Trustees agreed that they want the committee to update the comprehensive 2007 plan, with detailed procedures for each school site.

This is part of the February 01, 2013 online edition of The Mountain Enterprise. 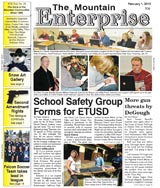 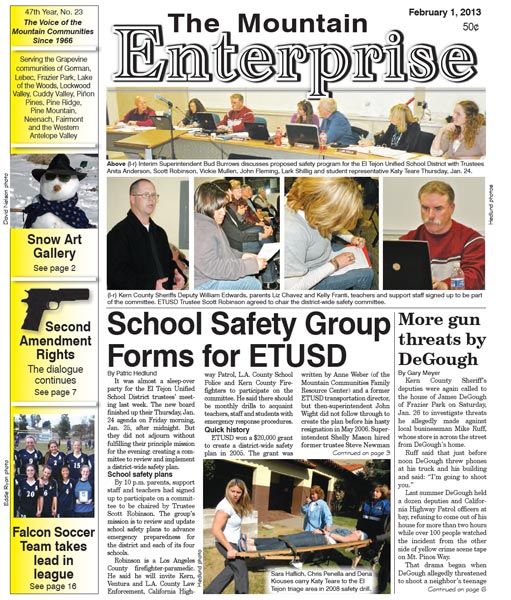