On January 3 we learned the 2015 game will be played by alliances of three teams, bringing their three robots together to try to win as many points as possible against opposing alliances.

Points are scored by stacking totes on a scoring platform and by adding recycling containers to the tops of the totes. Pool noodles—otherwise known as “litter”—scatter the ground. We win points by making our robots put the pool noodle litter in the recycling bins.

Our team is already working on strategies. On Monday, Jan. 5 students Felix Robredo and Lily Hallmark led the rest of the team in deciding what we want our robot to be able to do.

Our main strategy is to stack multiple totes as quickly as possible. We are also looking into ways to pick up the recycling containers and stack them. We chose our goals based on how many points we could score for each robot action.

On Wednesday, Jan. 7 Felix and Lily led the team in a debate about having a long robot versus a wide robot. The team came up with pros and cons for each approach. After heated debate we decided to build this year’s robot with a long frame.

Mentor Brian Bierman was impressed with the first meetings run by students. After we planned that out, every team member got to draw their own robot with their own ideas. We came up with ideas from forklifts to conveyor belts, snow plows to giant arms.

On Saturday, Jan. 10 we built the base of our robot, also known as the “kit bot.” Brianna Edwards, Rain White, Jackie Kelly, Ida Coover, Rachel and Lily Hallmark all contributed to assembly of the wheels.

After the wheels were put together, Roby Worster, Dallin Neeley and Michael Stegeman worked to construct the frame and fit on motors. Students got dirty and had red grease smudged everywhere!
Dawson Ford and Thomas Paniagua have been working on making the battery cart for competition.

Under the supervision of Mentor Brian Bierman, they’re almost done. Just a little spray paint in FMHS blue will finish it up.

Near the end of 2014, Freshman Benjamin Miseroy led the team in producing the safety animation video. He completed the video almost by himself and turned it in on time. That made Ben the MVP of the week for Snobotics.

One of our mentors, Mr. Kelly, has begun building game pieces we’ll use to practice. Students Felix Robredo and Christian Spillers were using circular saws and drilling, with Mr. Kelly’s supervision, to build pieces such as the scoring platform and the human player station.

Now, with some of the game pieces built, we could start driving practice.

Whipping out the joysticks for driving practice is always exciting! You would’ve thought we were at Nascar the way we were cheering.

So new drivers were on the loose Saturday afternoon, practicing straight lines and figure eights with help from mentor Faith Steele.

Between having new drivers and robot miscommunication a great time was had by all.

Our 2015 competition season is off to a great start for Snobotics. We can’t wait to see what’s in store for us.

Brianna Edwards drills to help build the station for the human players with supervision from Mr. Kelly.

It was hard to keep up with the robot. Some drivers needed more practice than others.

To see full stories with photos, please purchase a copy of the newspaper at one of the locations listed below.

Or, have your newspaper delivered via mail and include internet access! Just call 661-245-3794.

Pick up your copy of The Mountain Enterprise at these locations:

Pinon Pines
At the mailboxes

This is part of the January 16, 2015 online edition of The Mountain Enterprise. 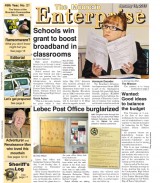 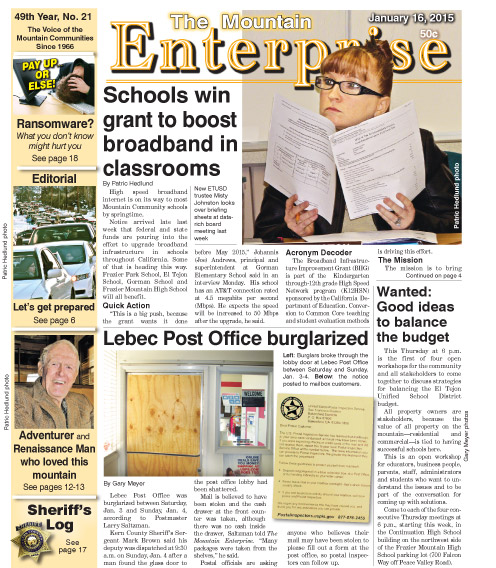