FRAZIER PARK, CA (Thursday, March 20, 2014 at 12:45 p.m.)—CHP reports that the 50-year-old Frazier Park resident had possibly suffered a seizure, impairing her ability to drive the 2004 Chevy Blazer. She suffered minor injuries (neck pain) in the accident.

FRAZIER PARK, CA (Wednesday, March 19, 2014 at 5:30 p.m.)—Reports that a vehicle left Frazier Mountain Park Road west of the park in a solo accident began just before 5 p.m. Wednesday, March 19. A gray Chevy SUV was apparently traveling westbound when the vehicle crossed over the eastbound lane, went up a 15 foot embankment, over the crest, then southward down the other side toward Cuddy Creek. The car came to rest in heavy vegetation.

The female driver, who was traveling alone, was removed from the vehicle by Kern County firefighters, placed on a stretcher and carried to an AMR ambulance waiting at the roadside, about 120 feet away. The driver was taken for medical treatment. We will report more as details become available.

This is part of the March 14, 2014 online edition of The Mountain Enterprise. 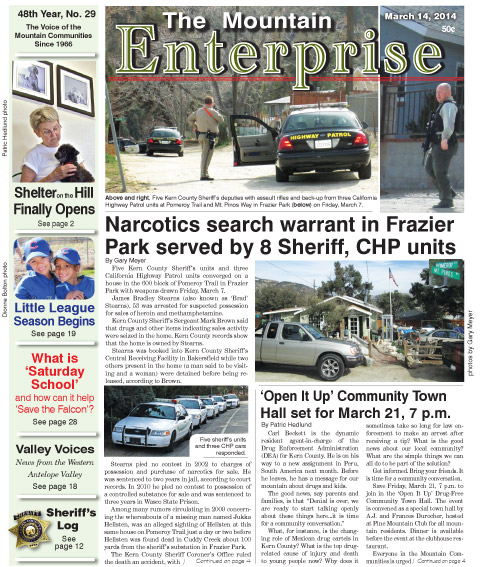