A wild chase-turned-manhunt began Friday morning, July 8, before 9:30 a.m. when Davonte Ray Walter, 24, of Los Angeles, driving a late model Chevy Malibu, failed to yield to a CHP traffic stop while northbound at speeds in excess of 100 mph on Interstate 5 between the Frazier Mountain Park Road and Lebec Road offramps, according to CHP Fort Tejon Area Officer D.C. Williams.

Walter initially pulled over near the rest stop, but as the officer was approaching, he took off and exited at Fort Tejon returning to Interstate 5, headed back south, Williams said.

At the four-way stop, he turned north on Monterey Trail then skidded around the next corner onto Mt. Pinos Way going east.

Brad Wallis was having breakfast at La Sierra Mexican Restaurant and said, “I saw him go by followed by a CHP at warp speed.” Wallis is a retired scientist from Jet Propulsion Laboratory.

The rear portion of the Chevy Malibu that was ripped in two as it struck a power pole seen to the right of the vehicle.

The suspect was seen on Mari Dominguez’ security video system running through her yard on Harriet Road at 9:38 a.m.

Many people reported seeing two cars at the crash site.

The e-Edition is available now with full photos and stories at The Mountain Enterprise e-Edition. Select the 2022-0715 edition.

This is part of the July 15, 2022 online edition of The Mountain Enterprise. 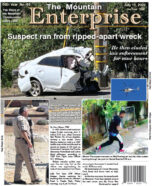 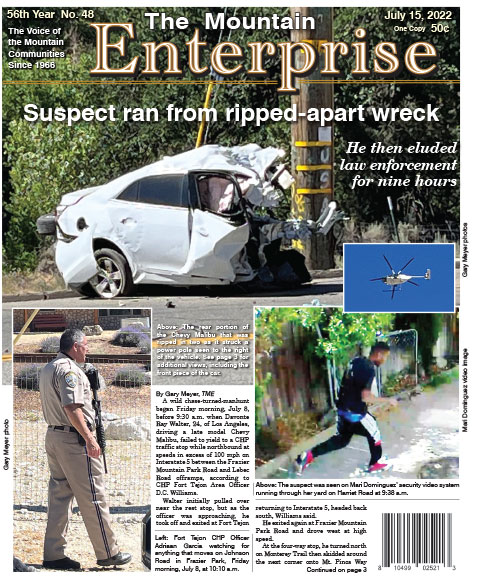