If it were a blind date—or a new neighbor ringing the doorbell—you’d find a six-foot stranger on the front porch, gawky and inscrutable, standing there for your consideration. Quickly. If you can pay the price.

In fact, it is plans for a major addition to the neighborhood that the Mountain Communities have been invited to speed-read thoroughly, analyze and critically evaluate in writing before July 13. The Tejon Mountain Village draft Environmental Impact Report (DEIR) is 15 notebooks, 13 of them 5.5 inches thick, two others adding four more inches, plus two rolls of large maps. They add up to a tower nearly six feet tall, about 21,000 pages long. Kern County will charge citizens who seek to access the full report $2,833, Planning Department Project Manager Craig Murphy said Tuesday, June 2.

“The county has been given only three full copies,” Murphy said, and they are all in Bakersfield, restricted to county offices. Instead, for public review, the county has a set of four CDs and is placing what they call an abbreviated “hybrid” report in the local library, (a petite 2.5 foot stack available during limited hours).

The review process appears to have been put on a fast track by the Kern County Planning Department, even as the public is still considering the U.S. Fish and Wildlife Service’s 5,200-page habitat plan for the 27 endangered and threatened species (including the California Condor) that may be killed or disrupted by the building and operation of Tejon Mountain Village. Public comments for that are due by July 7. Meanwhile, the DEIR of another major development, Frazier Park Estates, is scheduled to be released for public comment on June 5.

“It is completely impossible to read carefully or comment upon it in this amount of time,” said Jan de Leeuw of Cuddy Valley. “To simply read it from beginning to end in 45 days would be completely impossible.” The former member of Kern County’s Sierra Club Executive Committee resigned in 2008, refusing to engage in secret negotiations with Tejon Ranch Company (TRC) that resulted in creating a “gag agreement” prohibiting five of the largest environmental groups in the country from participating in the public review process mandated by the California Environmental Quality Act.

Residents such as de Leeuw, whose daily lives and surrounding environment will be affected by the impacts of Tejon’s developments, were strenuously opposed to the secret contracts that led to the Tejon Ranch Conservancy. The five “Big E” groups expect their silence to buy benefits if Tejon’s entitlements go through, and if a building and marketing program are successful. A percentage of proceeds from sales of homes would be used to support the conservancy.

Economic incentives abound. For shareholders, some say obtaining entitlements is an end in itself. Buzz among Wall Street analysts and bloggers (such as those on SmartMoney.com) predict Tejon’s stock will increase dramatically in value if TRC can quickly push through the permits from Kern County, whether the company decides to build in the near term or not.

Roberta Marshall, vice president and general manager of TMV, said, “We’ve studied these lands thoroughly for nearly a decade and have worked closely with the County, stakeholders and our neighbors to refine and improve the plan, now the public has an opportunity to review our plan and the County’s environmental report and see for themselves the great level of care that has been taken to ensure that TMV is sensitively planned to be a good neighbor within the Mountain Communities and make a positive contribution to Kern County’s economy.”

De Leeuw blogged back that Tejon Ranch has been working on plans for Tejon Mountain Village, “for more than ten years, investing millions and millions of dollars in consultants, lobbying and PR. And now the Public has 45 days to comment, and no money to spend? Is it just me, or is there perhaps a certain [lack of symmetry] in this process? It is like a trial in which the prosecution has five years and five million to prepare its case, and the defense has five minutes and five dollars. Fair? I don’t think so.”

Adam Keats of the Center for Biological Diversity, which withdrew from the secret negotiations and retained its right to comment on Tejon Ranch Company’s development plans, sent a note to de Leeuw, urging him to take heart: “I find that although these are huge documents and daunting to open up for the first time, once you get inside you realize that a lot of the info is ancillary to the main issues, and that the things you care the most about are pretty easy to focus in on. Dive in and get to the meat of the issues you care about and you’ll find that it’s pretty digestible.”

The URL for the DEIR is www.co.kern.ca.us/planning/pdfs/eirs/envirodoc.pdf. It works for Windows.

Keats also wrote in his June 3 email, “Oh, and on the TMV DEIR and [the Frazier Parks Estates] DEIR [and the U.S. Fish and Wildlife Service habitat conservation plan]—it’s worth everybody individually submitting requests for extensions on these deadlines as soon as possible, based on the size of the documents and the three different but near-simultaneous deadlines.”

This is part of the June 05, 2009 online edition of The Mountain Enterprise. 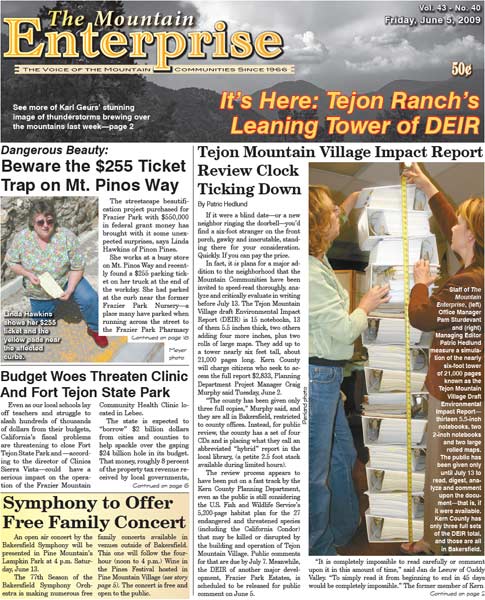