Tejon Ranchcorp is closing in on its goal to develop the entire Interstate 5 corridor from State Route 138 in Los Angeles County in the south to the area around Laval Road in Kern County to the north.

A public hearing will be held Tuesday, Dec. 10 at 2 p.m. before the Kern County Board of Supervisors about the Grapevine housing development. That subdivision may include up to 14,000 new single and multi-family homes—for a projected 42,000 new residents. An added 5.1million square feet of new commercial space, two fire stations, a sheriff’s substation, several schools and a multi-use library and community center are included in the plan. The build-out is projected over 19 years.

Its location is between the northern base of the Interstate 5 Grapevine and the Outlets at Tejon mall, adjacent to the Tejon Ranch Commerce Center. It is assumed that most residents will be employees at the complex of retail logistics warehouses at the Tejon Ranch “inland port” that supplies retail stores throughout the west.

If this project sounds familiar, it is. This is the second time Kern County Supervisors are voting to certify Grapevine’s Environmental Impact Report (EIR). The first approval in December 2016 was disqualified in 2019.

After the development was approved the first time, Kern County Superior Court Judge Kenneth C. Twisselman II upheld the Center for Biological Diversity’s argument in a court challenge that Tejon Ranch and Kern County failed to adequately analyze the greenhouse gas and traffic impacts of Grapevine if residents made more trips on I-5 and adjacent commuter roadways than the first EIR assumed.

The first EIR was withdrawn and recirculated with an updated analysis

Craig Murphy, Assistant Director of the Kern County Planning and Natural Resources Department, said the plan before the board for approval Tuesday, Dec. 10 calls for Grapevine to maintain a neutral carbon footprint, through mitigations.

That means Grapevine is not allowed to make the highly polluted air in that part of the San Joaquin Valley worse.

But neighboring Arvin has won the Spare the Air “Worst Air in America” award multiple times. Childhood asthma is statistically high in the area.

Murphy said in an interview, and in a presentation to the Kern County Planning Commission, that Tejon Ranch mitigations—such as on-site solar power generation—would “avoid making the pollution in that region worse. But we can’t require that they make the air better” than it is right now, Murphy added.

Mountain Community resident Katherine King of TriCounty Watchdogs commented that the Planning Commission’s Statement of Overriding Considerations reports there will be adverse effects, “including increased air pollution and water supply impact, but says that these significant and unavoidable impacts are acceptable due to the project’s benefits.”

The TriCounty Watchdogs disagree with the judgement of the Kern County Planning Commission on this issue.

Murphy said there had been additional mitigations required in the recirculated EIR, but did not provide a synopsis of what those air. Here is a hotlink to the EIR and related project materials.

Written or verbal comments may be submitted any time prior to the close of the board of supervisors’ December 10 public hearing. The public is also invited to speak at the hearing at 2 p.m. Tuesday at the Board of Supervisors’ Chambers.

Send advance comments to:
Clerk of the Board
1115 Truxtun Avenue, 5th floor
Bakersfield, CA 93301
For more information about this proposal, readers may contact Cindi L. Hoover, Planner 2, at 661.862.8629 or hooverc@kerncounty.com.

The December 6, 2019 issue of The Mountain Enterprise also contains the legal notice from Kern County giving precise details about the items before the Kern County Board of Supervisors for hearing and vote on Tuesday, Dec.10. 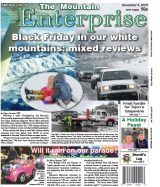 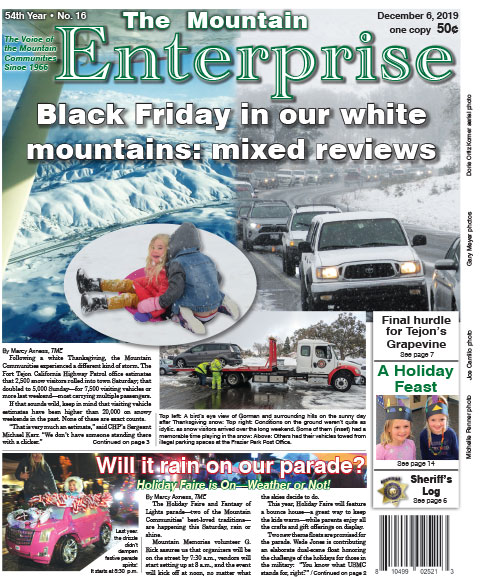