A small fire was reported on the morning of Saturday, Sept. 4, as the Pine Mountain Club Property Owners Association Governing Documents Committee was telecasting via Zoom. PMC Security Chief Patrice Stimpson and General Manager Karin Shulman excused themselves from the meeting. Stimpson headed over to Banff Drive and Zion Way on the west side of PMC, she confirmed to The Mountain Enterprise.

PMC resident J. André Boles reported that his wife Debra Tucker called 9-1-1 at 10:56 a.m. after spotting smoke coming from a wooded hillside in a small patch thick with pine needles at Zion and Banff. The fire was not in a structure, but on the forest floor.

In a PMC social media post about the fire later that afternoon, Security Chief Stimpson wrote a chilling summary: “We could have lost everything today.”

The incident commander told Stimpson that a KCFD arson investigator would be coming from Bakersfield. “Arson investigations are meticulous and take time,” she said.

Neighbors expressed concern that visitors from off the mountain—not realizing how dangerously dry fuels can be—may have tossed a cigarette on the ground during a walk.

Other causes are also possible.

Just a week before, on August 24, residents of Yellowstone Drive (near Bryce Court on the east side of PMC) reported what appeared to be a newly-installed Southern California Edison (SCE) transformer crackling and spitting sparks with bursts of flames at about 8 p.m. Susie Kramer said she heard it before she saw it: “It was popping, like fireworks,” she said. [Listen for yourself; Kramer’s video is at www.MountainEnterprise.com.]

A crew from Station 58 was at the scene by the time Kramer walked there, “keeping an eye on it.”

They told her that SCE would be there soon. Her roommate, Lee Benevidez, called SCE and was told his was the first report. Just then he saw the fire truck drive away.

An SCE crew arrived 30 minutes later. Kramer (who has friends who lost homes in Paradise) and Benevidez were surprised that firefighters left while the transformer was continuing to throw off sparks.

“Those 30 minutes could have been very flammable,” Benevidez said.

Far left: The fire in Pine Mountain Club Saturday, Sept. 4, 2021, was on the forest floor near Zion Way and Banff Drive. Left: US Forest Service fire crews from Apache Saddle and Chuchupate ranger stations took a break after the fire was out. Note the power pole directly above the wooded hillside where the fire occurred.

The e-Edition is available now with full photos and stories at The Mountain Enterprise e-Edition. Select the 2021-0910 edition.

This is part of the September 17, 2021 online edition of The Mountain Enterprise. 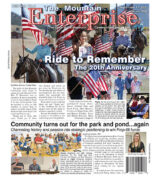 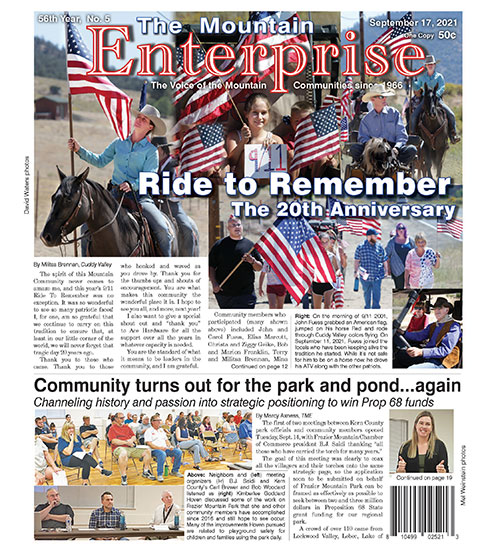