Fourteen young scientists from the El Tejon Unified School District qualified to compete at the Kern County Science Fair this month. Ten of the projects won awards, and six may go forward to state competitions. Meet them here.

Forrest Csulak found a “Catalytic Conundrum” was worth exploring, and his investigation of battery efficiency earned him second place in the High School Chemistry category at the Kern County Regional Science Fair on Tuesday, March 29.

Junior Josh Arreola was curious about how efficientl Nicola Tesla’s idea for a bladeless wind turbine could be. His project won first place in the High School Aerodynamics category. Both students will be going on to compete at the state level. They will be joined by four other young scientists from the El Tejon Unified School District.

“We had a total of 14 students attending the [Kern County Regional Science Fair] competition,” wrote parent Lisa Arreola, from Neenach. “This has been the most successful year for the district.” She reports that a total of 13 science projects went to the county event: nine from El Tejon School (one was a group project, the rest were individual projects); two projects from Pine Mountain Learning Center; and two projects from FMHS.

There were a total of ten awards at the county level: one first place, four second place, one third place and four honorable mentions. Four special awards were also given, to Brianna Edwards, Fletcher Matthews, Forrest Csulak and Josh Arreola. Six students are eligible to move on to the state science fair.

“Their successes came from the students’ perseverance and commitment to their projects. Students also received outstanding expertise from their mentors. Dr. Bryan Hallmark, Mr. Bradford Oliver, Mrs. Andria Bloom, Mr. Barry Lindaman, Ms. Debi Csulak and Mrs. Lisa Arreola. All dedicated their time with the students to ensure that their projects were ready to go on to the Kern County competition,” Arreola reported.

[For the record: Brent Howell was first identified in this story as Bent Howard. That error has been corrected. ]

This is part of the April 01, 2011 online edition of The Mountain Enterprise. 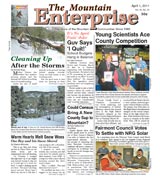 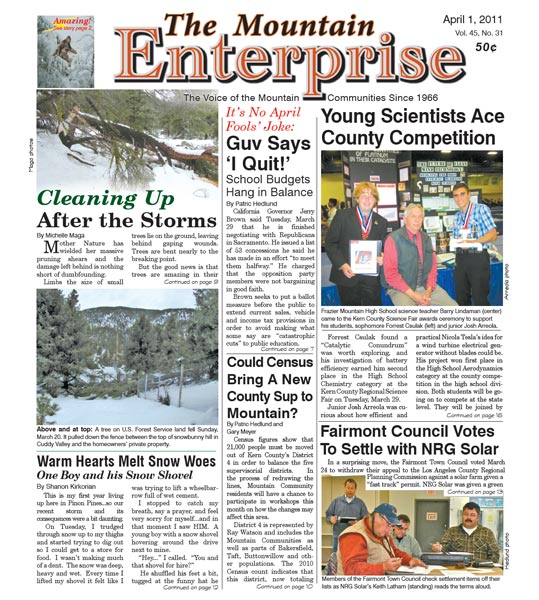