Odd, isn’t it? Susan B. Anthony was given a posthumous pardon this week by President Donald J. Trump for the crime of Voting While Female in 1872.

Crime of Voting While Female

Anthony had violated U.S. law permitting only men to vote. A mere 96 years earlier, Abigail Adams—wife of one president and mother of another—pointed out that it was all clearly stated in 1776, right at the top of the Declaration of Independence:

“We hold these truths to be self-evident, that all men are created equal, that they are endowed by their Creator with certain unalienable Rights, that among these are Life, Liberty and the pursuit of Happiness. That to secure these rights, Governments are instituted among Men, deriving their just powers from the consent of the governed.”

The founders meant every bit of that quite literally. It would be another 173 years before women’s votes would give them fair participation in also providing “the consent of the governed.”

Historically, the movement that led to Susan B. Anthony’s arrest in 1872 for having the audacity to stride into a polling place and vote as an American citizen, was deeply entwined with the efforts to abolish slavery.

The World Anti-Slavery Convention met for the first time in London in June 1840. When women from America who attended were denied the right to be seated as delegates beside their husbands, they began working to obtain their own freedom and rights in their own country.

Anthony was arrested 50 years after African American men had been granted the 15th Amendment’s promise of the vote, following the Civil War and Emancipation Proclamation.

In 1870, the 15th Amendment had stated: [the] “right of citizens of the United States to vote shall not be denied or abridged by the United States or by any state on account of race, color, or previous condition of servitude.”

But, as the Library of Congress documents thoroughly, it would take another 100 years before that promise was actually delivered upon.

Throughout the South, by the 1890s, Jim Crow laws strangled Black men’s right to vote. A quiet “gentleman’s agreement” was reached by Southern politicians and their Northern allies to look the other way to ignore systematic measures to withhold the vote from Black men in the South.

Murderous domestic terrorism was also waged by White Klansmen to suppress Black entrepreneurs and Black farmers and to extinguish efforts to exercise their right to vote.

It took the civil rights movement of the 1950s through the 1970s, with the deaths of Martin Luther King Jr. and many others, to finally win the right of Blacks to really vote in the south.

Through that same Jim Crow era, women marching for the vote throughout the U.S. were beaten, imprisoned and tortured to give up their campaign. Nevertheless, they persisted.

This month marks the 100th anniversary of two victories for women’s right to vote in the U.S.: August 19, 1919—the day Tennessee became the final state to ratify the 19th Amendment; and August 28, 1919—the day the U.S. Congress formally adopted the amendment as law: “The right of citizens of the United States to vote shall not be denied or abridged by the United States or by any State on account of sex.”

But tactics to purge voter rolls and to suppress the vote through intimidation and dirty tricks are still alive and well in American politics today.

Attack on the U.S. Postal Service

The irony is that the centennial of Americans’ passion to exercise their right to vote is occurring in the same week that Congress is calling on President Trump and Postmaster General Louis DeJoy to reverse their nationwide voter suppression tactics to undermine America’s oldest institution­, the U.S. Postal Service, which is older than the U.S. Constitution itself.

In June, 671 automatic letter sorting machines were ordered removed from urban centers across the United States. Internal documents obtained by The Washington Post showed warnings issued by USPS postal administrators to states about slowing of mail during elections. CNN confirmed personnel policy changes, as did The Mountain Enterprise, in California post offices, telling carriers to “leave mail behind” and canceling overtime. Federal News Network wrote in July this was happening as staffing of the USPS is down 15-20% due to coronavirus. Meanwhile, President Trump blocked $10 billion for USPS in the first CARES Act.

The president admitted to reporters he wants to limit vote-by-mail options in the upcoming national election. Louis DeJoy denied there is an effort to cripple Americans’ right to vote safely this year. But those high-speed sorting machines are not being returned to service.
The Mountain Enterprise continues its series, “Vote Early, Vote Strong” [page 14], this week. The way to honor the fight to win our right to vote is by using that right.

This is part of the August 21, 2020 online edition of The Mountain Enterprise. 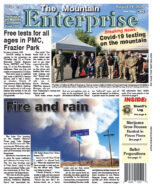 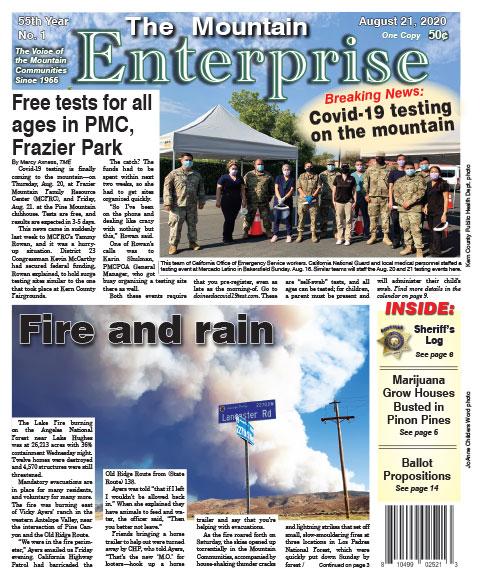