There will be a rollicking three-ring, multi-faceted celebration in Frazier Mountain Park this weekend, starting Friday. You can find the full official schedule in The New Mountain Pioneer. Send your photos of the weekend to www.MountainEnterprise.com to compete to win a dinner at La Sierra Restaurant.

By Sabrina Stolting
Parade Grand Marshal: The 2011 Fiesta Days Grand Marshal on Saturday, Aug. 6 at 10 a.m. will be the Shocker Monster Truck, the pride and joy of Shocker Motorsports (SM). Before SM entered the motorsports scene, it was ‘Ed’s 4×4 Repair,’ established by Ed Gerber in 1968 to serve all Bakersfield’s off-road and performance needs. Over the years, Ed and his son Pat worked together to build highly technical specialty projects. Then they built a complete monster truck for a customer. Pat was extremely proud of this accomplishment and was later asked by the customer to be the driver for the truck they’d built. Shortly after, Ed realized Pat’s ambition and purchased the truck from its owner so his son could race monster trucks.

In late 1999, Ed Gerber passed away, leaving Pat at the helm of the family business.

Following the inspirations and vision of his father, Pat took the family business to the next level. He organized Shocker Motorsports. SM has grown to be a highly recognized company in the field of aftermarket off-road truck accessories and monster truck racing. SM participates in monster truck events all over the west coast. Since 1990, Shocker Monster Trucks has grown to win recognition from the media and even Mattel Toys.

Shocker is raced by owner Pat Gerber. Everything from its shocks to its chassis is custom built to make it the racing monster that it is.

Long before moving here, Dee and her family often visited this area to camp and fish at Piru Creek. Her children enjoyed the winter’s snow activities and her husband often visited to hunt deer. In 1976, the Bumgardner family moved to Frazier Park.

Dee enrolled her five girls and one boy into the school system, then became a fixture in the school PTSOs for 25 years. She headed the emergency phone chain (calling to alert parents to school ‘snow days’) for years.

Being an involved mother has led from karate to Girl Scouts to every school sports program offered. During her youngest children’s high school years, and her husband’s early retirement, she became heavily involved in the VFW Ladies Auxiliary and the local Christian Women’s Club. She still loves volunteering for both these groups.

Volunteering for the VFW Auxiliary led Dee to her local fame with the VFW’s Frank Thorpe Fiesta Days Pancake Breakfast. She finds her calling in preparing and distributing the batter to the grillmaster, who then makes the pancakes that perfect shade of gold. She has won the title “Batter Babe.” Dolores takes great pride in knowing there has never been a time when she was unable to find the resources to assist someone in the community who needed help.

She credits this to her many years of serving this beautiful town and having to use all of its resources herself on one occasion or another. Dolores is quick to tell you that “Frazier Park is my home forever. It is where I find peace and joy.”

We are honored to have such an amazing woman as our 2011 Fiesta Days Honorary Mayor.

Fiesta Days Royal Court
Queen Kayla Flinn
will be a Junior at Frazier Mountain High School. Through Independent Study, she is a year ahead and is also enrolled at Bakersfield College. She plans to graduate early from FMHS, in 2012.

Kayla participated with the FMHS robotics team, played for the Falcon FMHS varsity softball team and was a varsity cheerleader as a sophomore in 2010. Kayla’s public speaking skills have developed with her involvement in the Young Women’s Organization at church. She has become skilled at capturing an audience’s attention. She is also a youth group counselor who has been desribed as "caring and compassionate, with a smile always on her face.” Kayla participated in the 2011 Bakersfield Ronald McDonald House Walk for Kids and raised $700 in two weeks for the House. She plays the clarinet and loves to cook. She has also made blankets to comfort cancer patients.

"Music is a powerful force that moves us ordinary people to do extraordinary things," is a favorite quote. She was a 2010 Fiesta Days Princess and says she loved being a part of it. Last year she even won the watermelon eating contest! Kayla says she loves living in a community where she can be so involved.

Princess Jasmine Wells will be a Senior at FMHS in the fall. She has 3.62 GPA and is a Girl Scout who earned her Gold Award, the highest award a Girl Scout can earn. She has volunteered for Meals on Wheels, in a canned food drive and helped clean up snow bunny hill. She is certified in CPR and loves to quilt. She works at the In-N-Out Burger in Lebec. Jasmine was JV Falcon Cheerleader captain at FMHS and will be varsity cheer captain this year. Jasmine is the oldest girl in a family of six. She says that when she sets her mind to something, she acheives it. She is described by others as "an inspiration to those around her." Jasmine says she loves living in a community where everybody knows everybody else. 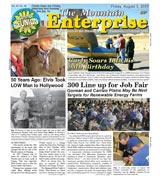